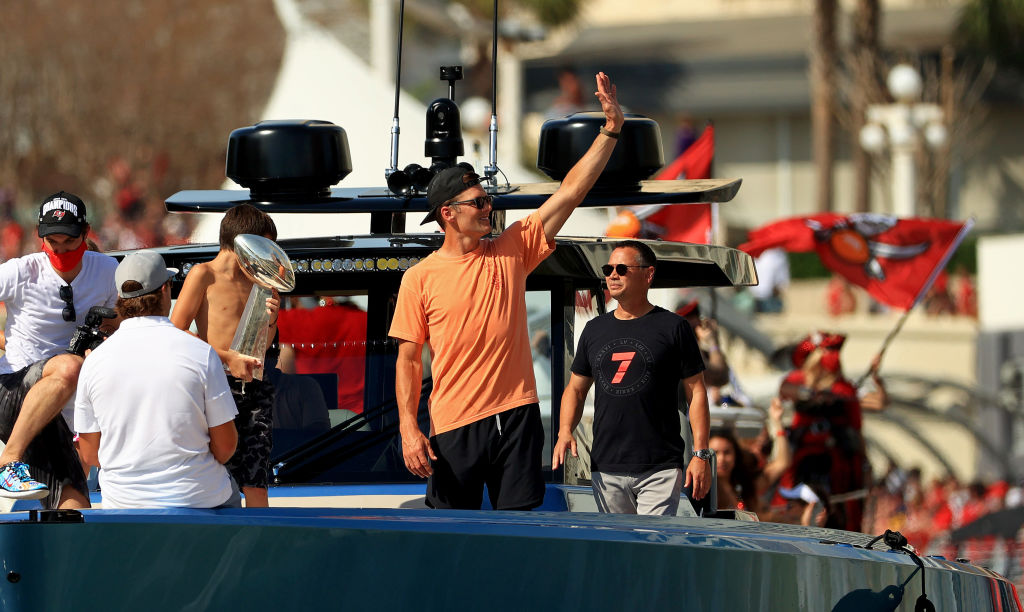 Tom Brady used the Tampa Bay Buccaneers Super Bowl Championship boat parade as the big coming-out party for his $2 million yacht. That custom 40-foot yacht is about as nice of a boat as money can buy if you’re looking to cruise around Tampa Bay but it’s not necessarily ideal for running across the Gulf of Mexico for a few nights in Tulum or down to The Florida Keys or across to The Bahamas.

Brady’s 40-foot custom yacht was first seen back in December but all of Tampa Bay and anyone following the Super Bowl parade witnessed Tom Brady and his crew on the boat tossing around the Lombardi Trophy. Here’s a refresher on that boat if you need a reminder:

Brady loves his 40-foot custom yacht from Wajer so much that he’s tripling down and spend $6 MILLION on his next yacht. His 40-footer had a $2 million price tag but Brady’s on the verge of purchasing a $6 million 77-footer that he and the family can take on overnight trips.

Tom discussed the new 77-footer on the Wajer Yachts YouTube channel. The segment starts around the 14:30 mark and I’ve set the video to start then but you can jump ahead in the video to hear Tom Brady discuss becoming a yacht guy after moving to Florida. There’s also a video below of what his yacht will look like along with some comments from Tom.

If you’d rather not watch, Brady says:

“The 55S is an amazing boat, and it’s been an amazing boat for our family. I think the 77 will be a little bit more suited for what we need it for down here, which is a few more day trips and weekend trips. We spend a lot of time in the Bahamas. So going from the East Coast of Florida across into the Bahamas and around the Bahamas would be really great trips for us as a family.”

While that video is only a rendering of what the finished yacht will look like it’s a stunning imagination of what Tom’s life will be like once he takes control of that ship. He’ll easily be able to take that boat down to The Bahamas and all throughout the Caribbean if he wants. Or rather, he can send his captain and crew with the boat and meet them at whatever destination he chooses.

Together, Tom Brady and Gisele have a combined net worth somewhere in the range of $600 million so a $6 million yacht is extremely affordable for them. But it will also instantly become one of the nicest yachts in Tampa Bay once this project is completed.