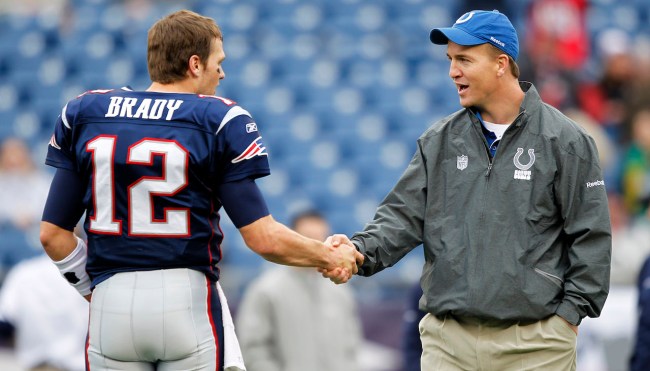 Over the last few weeks, the NFL has been slowly rolling out their NFL 100 All-Time Team, as they count down the top 100 players to ever grace the National Football League. And on Friday night, one of the game’s true modern-day legends were added to the list: former Indianapolis Colts and Denver Broncos quarterback Peyton Manning.

Manning, who won two Super Bowls during his time as a starting quarterback in the league from 1998 to 2015, is widely considered to be one of the greatest quarterbacks to ever live, as his cerebral nature and intense preparation led him to become one of the most intelligent players to ever grace the game of professional football.

However, when you talk about Peyton Manning, it’s almost impossible not to talk about his New England Patriots counterpart Tom Brady, as the pair were heated yet amicable rivals for the majority of both of their storied careers.

As a result, the NFL brought in Brady — in addition to Bill Belichick, Brett Favre, and Chris Collinsworth — to induct Manning onto the NFL 100 All-Time Team, which lead to the future Hall-of-Fame Patriots QB telling an awesome story of how the two once worked out and studied together one summer, and how those training sessions led to Pats tight end Rob Gronkowski becoming a star.

"One offseason we got together to talk football for two or three days. Just the two of us." 🐐🐐@TomBrady talks about his experience working with his #NFL100 All-Time teammate Peyton Manning 👀

While fans of the NFL have long known about the friendly on-field rivalry between the pair, the revelation that they once trained together is definitely a new one, as even NFL Insider Ian Rapoport says that he “doesn’t remember” ever hearing about such a thing. Simply awesome stuff.