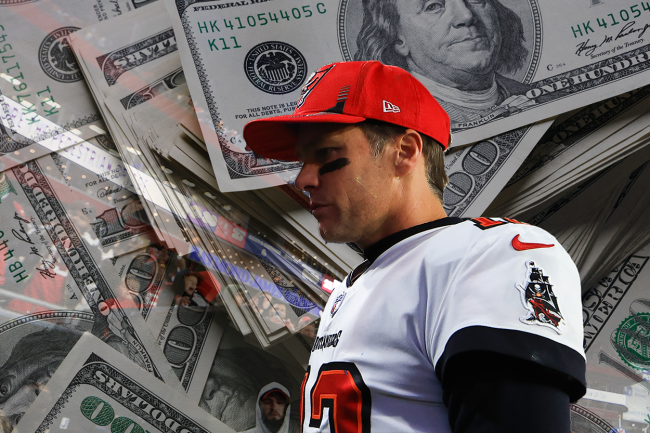 Tom Brady almost made history on Sunday afternoon but couldn’t quite pull it off. After falling behind 27-3, the Buccaneers came back from the largest deficit in NFL playoffs history since 28-3 against the Falcons and nearly won the game in the closing minute.

However, the Rams got the ball back with 42 seconds, drove 63 yards on five plays and advanced to the NFC Championship on a walk-off field goal.

.@CooperKupp put the team on his back.

In the process, Brady’s bank account took a big hit. Obviously, with a net worth around $250 million, money is no object to the 44-year-old, but he missed out on a big bonus with the loss.

Brady originally signed a two-year deal with the Buccaneers worth $50 million and then signed an additional one-year extension that added $25 million more to the deal. Included in the contract are quite a few incentives.

He had the chance to earn one on Sunday. Brady had a $500,000 incentive bonus for winning a game in the NFC Divisional Round, which obviously did not hit.

In addition, Brady had two more incentives line up if the Buccaneers did win, which, again, they did not.

Thus, by losing to Los Angeles today, Brady missed out on at least half of a million dollars and the opportunity to earn $1 million more. Tough.