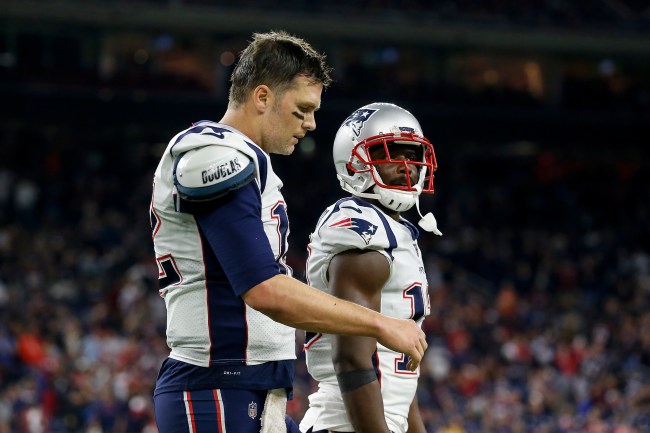 I don’t think there’s a doubt in anyone’s mind who tuned into the Patriots vs. Texans game Sunday night that Tom Brady considered committing a homicide against his young receivers, but couldn’t because he does not have any weapons (both in the literal and figurative sense).

Sunday Night Football cameras captured Brady emasculating his young receiving corps early in the second quarter for their slow and “robotic” route-running in the eventual 28-22 loss.

Former NFL quarterback and current analyst Dan Orlovsky also pointed out the lack of trust Brady has in every receiver outside of Julian Edelman via an incomplete pass to Phillip Dorsett in the waning moments of the first half. Orlovsky took some creative liberties in claiming Brady told Pats offensive coordinator Josh McDaniels he’s “done” with Dorsett while examining the play on a tablet.

Been saying this for weeks now for @Patriots offense. Outside of the physical-12 has trust in 1 guy. Edelman. That’s it…and it’s warranted. Watch 👇🏼 below. @MikeGiardi @patspulpit #SNFonNBC #Patriots @RochieWBZ @BenVolin pic.twitter.com/Vf8mbaUqXg

During Brady’s interview with WEEI’s “The Greg Hill Show” Monday morning, the Patriots quarterback walked back his frustration with his receivers and stomped out Orlovsky’s claim that he’s ‘done’ with Dorsett, Brady’s second most effective receiver.

“I would never think that way: ‘I’m done with him.’ That’s crazy,” Brady said.

“I think a quarterback’s responsibility is to try to lead and motivate. We’re trying to motivate people and get people to play their best. And guys are trying.”

Brady made sure to express his support for N’Keal Harry, the Patriots first round pick in the 2019 draft, who has been sidelined most of the season with an injury and played just 22 snaps Sunday night after a weak route led to a Texans interception.

“N’Keal is working his tail off. He hasn’t had a lot of opportunity, and he’s learning as he’s going. But to expect someone to go out in their third game of the year and be perfect, I think that’s unrealistic for anyone. So, I love what N’Keal is bringing. We’re gaining confidence every week.

Brady also gave a hollow pat on the head to Jakobi Meyers, a 23-year-old undrafted free agent who’s still got a lot to learn.

The Patriots, who dropped out of first place in the AFC, will continue to be tested. They play the Chiefs next Sunday at home in a must-watch NFL football game.