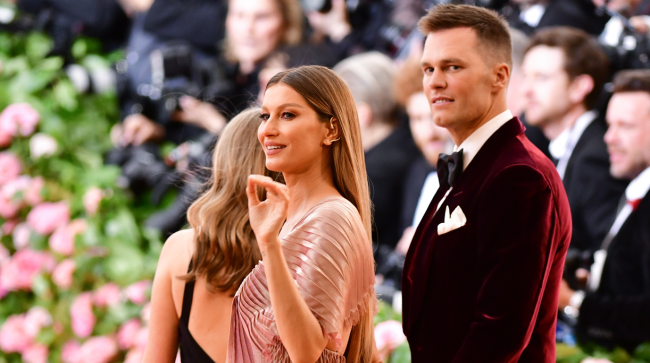 If football fans are getting tired of hearing about all the drama surrounding the marriage between Buccaneers quarterback Tom Brady and his supermodel wife Gisele Bundchen, just imagine what the guys inside the Tampa Bay locker room are feeling.

Actually, you don’t have to imagine it, because according to RadarOnline.com sources, Tom Brady’s teammates are also getting “irritated” by it.

Tom Brady’s football teammates are infuriated that all the talk has been on the 7x Super Bowl champ and his crumbling marriage to Gisele Bundchen, RadarOnline.com has learned

Sources tell RadarOnline.com, the ferocious football competitor Brady has become a locker room laughingstock as he works overtime to prevent Gisele from heading to divorce court.

We’re told that some of Brady’s teammates are opening snickering the 45-year-old superstar quarterback is looking weak off the field — while others are hoping he takes a hike and quits the games, sources said.

The sneering exploded after Brady skipped some of the preseason training to throw himself at the beauty’s feet.

Some Buccaneers players are reportedly tired of hearing about Tom Brady and Gisele, others think it’s funny

“Some of the players are irritated that all the talk’s on Tom and his messed-up love life,” said a source.

“Others find it damn funny that he’s this supposed Greatest of All Time player, but now is groveling to his wife for one last chance to prove himself. There are some pretty cruel nicknames and jokes doing the rounds.”

Gisele has reportedly been living in a home separate from Tom for months. She did not attend the Buccaneers’ first home game, but Brady’s kids did. It was also reported that Brady spent his training camp break with his kids in the Bahamas, but not with Gisele. He also reportedly spent some of that break from training camp in the Hamptons visiting the son he had with former girlfriend Bridget Moynahan, again sans Bundchen.

Now, with Hurricane Ian battering Florida, Brady and Gisele have taken refuge in Miami, but not in the same home.

RadarOnline.com’s source added, “Tom could do without people laughing at him behind his back. That’s just brutal and demeaning to the guy.”

Good point. Let he who is married to a woman worth $400 million cast the first stone.