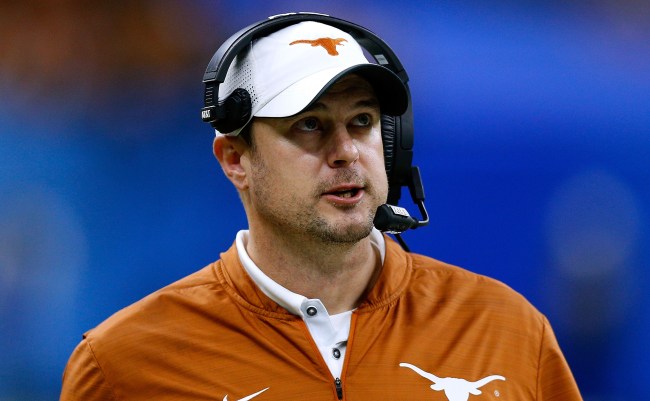 Appearing on Golic and Wingo on Tuesday, Herman referred to the University of Texas as the “mecca” of college football.

“I fell in love with big-time football as a graduate assistant here [at Texas] and I’m a Division III guy and had coached a year of Division III football and all of a sudden I’m a graduate assistant at the mecca of college football,” said Herman. “So, it certainly was appealing back then and we’re proud to be back 20 years later as the head coach. But I think the state of Texas does well when all of its in-state schools do well, but when you’re the university of whatever state it is you carry a responsibility to make your state proud.”

Pride is one thing. Reality is another. And the reality is that over the past decade the University of Texas isn’t even in the top 10 in winning percentage.

College football fans being as rabid as they are, took great umbrage with Herman’s statement.

Was he currently on blow when he said that?

They can’t even keep Texas recruits from leaving for osu Georgia Alabama Clemson and Oklahoma... slow your roll buddy

Please tell me this is a joke

On ESPN today Tom Herman (head coach at Texas) said “I love coaching at Texas! Everyone wants to play here. We are the mecca of college football” Tell me Tom were you high when giving this interview or do you just not understand there are other teams in college football?!?!

Lmaof! Crawl back under that rock you have been under for more than a decade now!

Why does the Mecca go 8-4 every year 😂😂😂 pic.twitter.com/LZiZsgKXKy

As an Auburn fan, it pains me to say this...has he looked way down east along I10 in Tuscaloosa?

Is it true that if you add up all of the teams that play college football within the state of Texas, they have one national championship combined to show for their efforts over the past 40 years? Some Mecca.

Actually that is true.