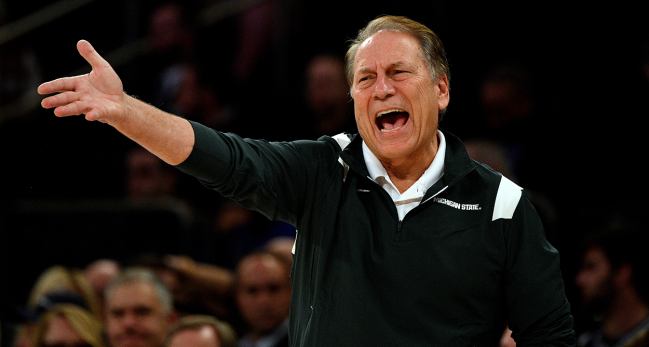 The Big Ten finally made a decision about the wild fight that ensued in Michigan State’s tunnel. They’re officially fining the Spartans $100,000 for the incident. Meanwhile, the Michigan Wolverines were given a “public reprimand.” Now, basketball coach Tom Izzo weighs in and he’s not happy about it.

According to Kyle Austin, Izzo is “completely upset” about how everything has played out. The Michigan State basketball coach is fuming over the $100,000 fine the Big Ten issued while he goes off about the Wolverines being “reprimanded.” His full quote is below.

Tom Izzo said he is “completely upset” about the Big Ten’s decision to fine Michigan State $100,000 and issue Michigan a public reprimand for the tunnel incident. Emphasized he doesn’t condone MSU players’ actions but criticized UM’s management of the tunnel pic.twitter.com/gyLxAoFvma

Either way, the Big Ten had to step in and do something about it. Maybe the Spartans will change their tunnel entrance, as it seems to have become a problem. Regardless, Tom Izzo straight up isn’t a fan of how the conference is handling the situation.

To be fair, we’re not entirely sure what reprimand really means for this either. Michigan State was the clear aggressor in the tunnel brawl. Tom Izzo clearly wants a change made. However, his criticism of the Big Ten makes sense as well.

At the end of the day, Michigan State will likely pay the $100,000 fine. And hey, perhaps it’s time for the program to switch up the tunnel entrance.