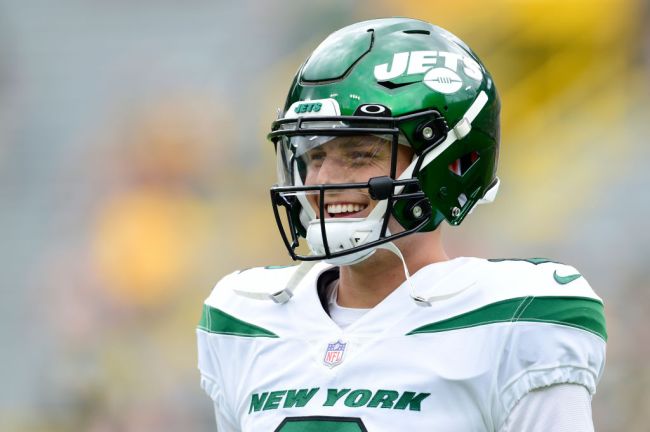 Tony Romo played 156 games under center as an NFL quarterback. That qualifies him as someone who can evaluate talent at the quarterback position, or at least it should. He’s been there, done that, and undoubtedly possesses a big-time football brain, but that doesn’t mean we can be critical of his preposterous take about Zach Wilson reaching Patrick Mahomes levels sooner rather than later.

Romo offered up some predictions for the upcoming NFL season on a CBS media call on Wednesday, and New York Jets will love what he had to say about the rookie quarterback out of BYU.

Romo not only believes that Wilson will be the Jets’ savior under center they’ve been longing for what seems like forever, but that he will get in the ‘Patrick Mahomes stratosphere’ in the next few years.

Tony Romo just told me on CBS Zoom session that Zach Wilson can get in Mahomes stratosphere; Romo thinks Jets rookie is that good. But he also likes Tua and considers Dolphins a playoff team.

Romo has every right to be high on Wilson, he’s certainly not the only person out there that thinks he could turn around the Jets, but come on, the Mahomes stratosphere?

Wilson hasn’t played one single second in an actual NFL game. Mahomes is one of the most talented quarterbacks to ever throw a football. Giving Wilson the Mahomes nod, whether it be today, or even two years from now is absolutely absurd.

Among other hot takes Romo offered up during the media call was that Tua Tagovailoa was going to take a big step this year, the Patriots are “for real,” and that the AFC East is “set to become one of the most dominant divisions in the NFL.”

Romo said all of those things without mentioning the Bills or Josh Allen.

What a day for Mr. Romo. NFL fans reacted accordingly:

mahomes is the most talented qb of all time. Can we stop hyping up rookies who havent played 1 regular season game?

Oh okay. So Wilson is potentially the 2nd best QB in the game already. Cool.

Tony been drinkin a few too many Corona’s this summer https://t.co/jJqXFZeFtE