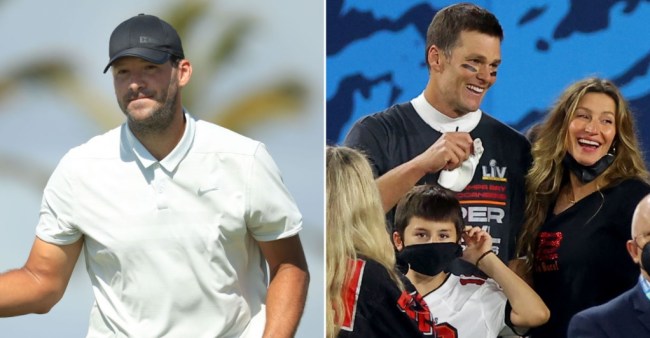 Some people were not happy with Tony Romo’s joke during the Tom Brady 600th TD ball negotiations.

During Sunday’s Bucs-Bears game, wide receiver Mike Evans accidentally gave a Bucs fan Brady’s record-setting 600th TD ball. Security immediately went over and negotiated a deal with the fan for the ball. While the negotiation was going down, Romo joked that Brady should offer up his wife Giselle to the fan in exchange for the ball.

Tony Romo: “So what do you want a million? No? A day with Giselle and I’m in. Ok Tom will do it, he’ll allow it”

Romo began trending on social media because people were angry that Romo was “pimping” out Brady’s wife in exchange for a ball.

Tony Romo suggesting Brady trade a date with his wife for his 600th TD ball is just weird/borderline creepy. Dude is a good broadcaster but so awkward sometimes

I don’t think what Romo said was funny. It was tasteless. But that’s just me.

Bro Romo is really trending because y'all are upset about that Giselle joke..

What the actual fuck @cbs … why do we need to listen to @tonyromo fantasize about trading a football for "a day with Giselle"? What does Mr. Romo presume would happen with Giselle during that day she has been traded like property for a football?

Good to know that Tony Romo sees Giselle as chattel owned by the Buccaneers. Very cool.

Tony Romo—-you just showed how classless you are by bringing Giselle into what you thought was humorous. Real lack of class there little boy.