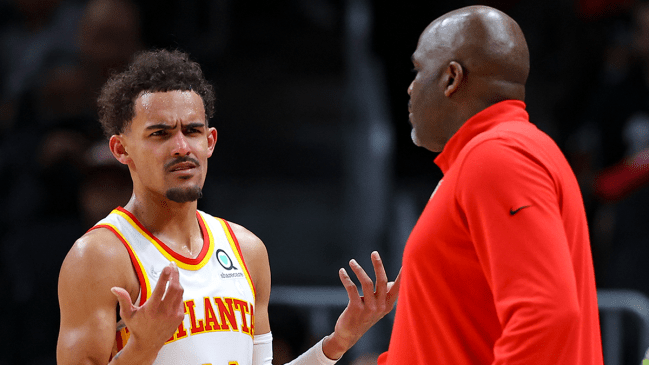 The Atlanta Hawks were in fairly rough shape when the team secured the talents of Trae Young in the 2015 NBA Draft, and while they weren’t able to turn things around overnight, the University of Oklahoma product has become the face of the franchise (and a fantastic NBA villain) while slowly but surely helping them reverse their fortunes.

The Hawks also benefited from the decision to part ways with former head coach Lloyd Pierce before promoting his assistant Nate McMillian to lead the team toward the end of the regular season in 2021. Following that reshuffling, Atlanta made it all the way to the Eastern Conference Finals, and while they were knocked out in the first round of the playoffs last season, they headed into the current campaign looking like a fairly formidable threat.

The Hawks have posted a respectable 13-10 record so far, but it appears there’s some trouble brewing in Atlanta based on what reportedly unfolded last week.

According to The Athletic, Young has been nursing a shoulder injury that led to the star guard declining to participate in a shootaround prior to Friday’s game against the Nuggets in favor of having trainers try to treat the ailment before deciding if he was in good enough condition to suit up for the contest.

However, sources told the outlet that particular approach did not sit well with McMillian, who apparently informed Young he would either have to come off of the bench or miss the game entirely for failing to participate in the pregame warmup. That went over just as poorly with Young, who declined to make the trip to State Farm Arena and presumably watched his squad secure the 117-109 victory at home from the comfort of his home.

Young did return to practice over the weekend and is set to play when the Hawks take on the Thunder on Monday night. McMillian tried to downplay the situation when he described what transpired last week as the result of a “miscommunication,” but it’ll certainly be worth keeping an eye on things in Atlanta as the season continues to unfold.