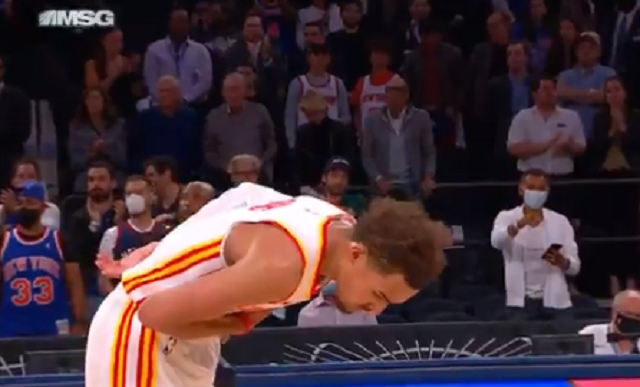 Trae Young enjoyed playing the villain against the New York Knicks in the playoffs.

Early in the series, Knicks fans could be heard chanting “fuck Trae Young” during game one but had to eat their words after Young hit a game-winning shot.

MSG is loud and proud!

The crowd is screaming the 'FUCK TRAE YOUNG' chants and apparently, it's getting to the Hawks players judging by that inbounds play. #NewYorkForever pic.twitter.com/S5uBdgiKUk

Things got a bit more heated during game 2 after a Knicks fan was seen spitting on Young.

Did a Knicks fan spit on Trae Young? 😬

During game 5 of the Knicks-Hawks series, Young was seen talking trash to Knicks fans in MSG as the Hawks’ lead started to grow.

Trae Young hasn't forgotten about someone trying to spit on him at MSG in Game 2. He mimics spitting while talking to some Knicks fan on celebrity row. Seems to say "Are you gonna spit on me next?" Then he smiles. pic.twitter.com/Gihge9VHZ1

As the Hawks were set to eliminate the Knicks from the playoffs, Young took a bow after hitting a deep 3 in the final minute of the game.

Knick fans were giving their squad a standing ovation and Trae Young hit a deep 3 on 'em, then Knick fans started booing! 😂😂😂😂😂 pic.twitter.com/9vWDT1E6I7

Here’s what Young had to say after taking a bow during game 5 vs the Knicks.

“I know where we are. I know there’s a bunch of shows around this city. And I know what they do when the show is over.”