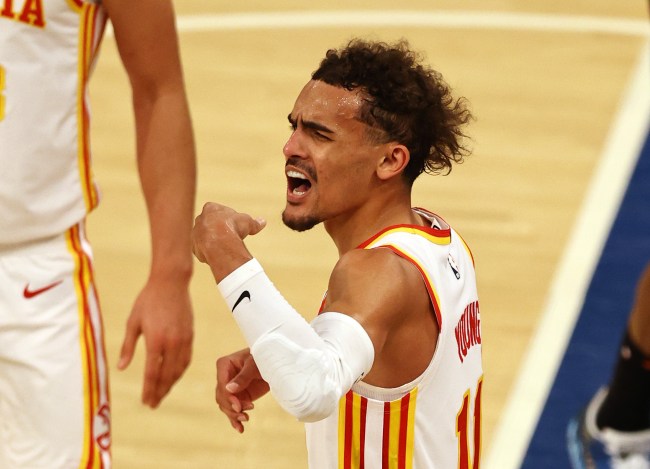 Knicks fans are excited. The haven’t made a playoff appearance since the invention of the Cotton Gin, and far be it for me to judge what a drought like that does to a fanbases’ psyche.

Add that to a year-long COVID slog, Trae Young ripping the Knicks hearts out in Game 1, and six $28 vodka crans at MSG, and you’re destined to have some sleazeball launch a loogie on an opposing player.

My guess is one of these two fans are the ones who spit on trae. This was kinda easy to deduce – thanks to gettyimages. Bad idea – good luck attending future sports games https://t.co/vZriWyC65n pic.twitter.com/yqMOudfQSE

Following the 101-92 Knicks win in Game 2 to knot up the series, Trae Young reacted to the incident on Twitter.

Young’s reaction was far more forgiving than Russell Westbrook’s, who on the same night was showered with popcorn by a dirtbag Philly fan and required a Tekashi 6ix9ine security team to restrain him from ending the fan’s existence.

Russ got heated after a fan threw popcorn at him pic.twitter.com/XyMRUxUVwc

I’ve said it before and I’ll say it again, fans who overstep should be required by law to confront the players they’ve disrespected in a padded room. The footage will then be streamed via PPV and proceeds will go to delivering Adam Silver hot meals. Win-win for everyone. Except maybe the douche canoe fan, but that’s just the cost of doing business.

a fan threw popcorn at russ. someone spit on trae young. apparently fans were kicked out for heckling ja morant’s family in utah. i rescind my “it’s great to have arenas with fans again” tweets.