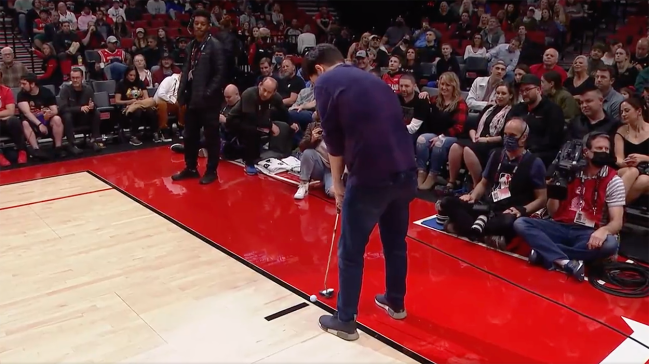 There is a lot of money to be made in professional golf, win or lose. That was not the case on Friday night at the Portland Trail Blazers’ game against the Houston Rockets.

There was a lot of money on the line, but only with a win. And neither the money nor the win had anything to do with the game itself.

During a stoppage in play, or perhaps at halftime, a fan was invited onto the court for a chance to win $50,000.

The task was simple. Well, not really. It was simple in principle, but extremely difficult in reality.

After a very tiny cutout was placed on one baseline, the fan set up with his putter and a ball on the far baseline. He lined up his shot and sent the putt rolling across the hardwood toward the small target.

As it got closer and closer, it looked good. And it was.

The putt, somehow, went all of the way across the court and through the small gap in the cutout.

⛳ A fan in Portland wins $50,000 on a full-court putt! pic.twitter.com/hkPSYlungv

The man won $50,000 and the place absolutely erupted. Here is the full sequence of events:

As it would turn out, that insane, unbelievable, $50,000 putt was the only thing that Portland fans would have to cheer for on Friday as the Blazers lost by 20 points to one of the worst teams in the league. Honestly, the adrenaline rush from the fan draining the putt would have been worth the price of admission alone. Especially for the man who left the arena with $50k in his bank account.