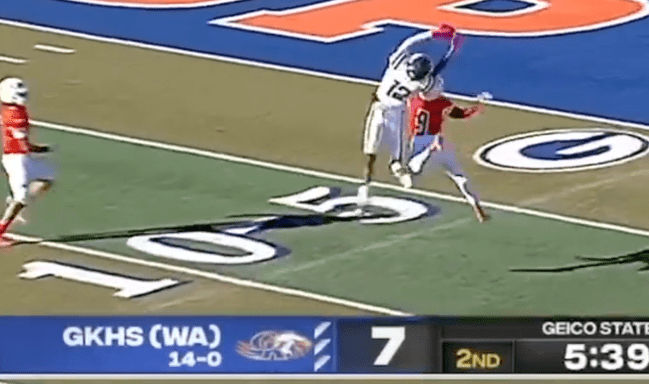 Hunter, a 6-foot-1, 165-pound cornerback is a consensus five-star recruit and the No. 1 recruit on 247Sports. He was a virtual lock to commit to play for Mike Norvell at Florida State until about an hour before his commitment ceremony.

Rumors began to circle that he might flip. And then he did exactly that in savage fashion. The college football world had its collective mind blown.

Not only was the move unexpected, but it was historic. Hunter is the highest-rated recruit to ever commit to play college ball at a Historically Black College and University.

After flipping college football on his head, Hunter made one of the most insane catches that you will ever see. He will play corner in college but also starts at wide receiver for his high school.

During the early moments of Saturday’s “high school bowl game” against a school from Washington, Hunter went X-Games mode. Take a look:

And then, during the closing moments, Hunter took a screen 29 yards to give Collins Hill the lead with 28 seconds left.

Graham-Kapowsin ended up scoring as the clock expired and won the game, but it didn’t take away from Hunter’s big day.

In response to Hunter’s performance, Florida State fans were the butt of every joke.

I see why PWIs are salty. https://t.co/6WhEHxj8ic

I know we(Georgia) were in the mix too but Florida State GOTTA feel a way. Hunter is a program changing player.

Y’all fsu fans been bored recently I guess it’s nothing to do since jimbo and Travis hunter left 🤣🤣🤣 https://t.co/pVNThqBEsD

Reminder: Travis Hunter committed to Jackson State over FSU and your favorite school too. Hell, ya’ll didn’t even get a visit. But enjoy yourself!

Mike Norvell when Travis Hunter tossed that FSU hat in the trash. pic.twitter.com/q3fNvlptf1