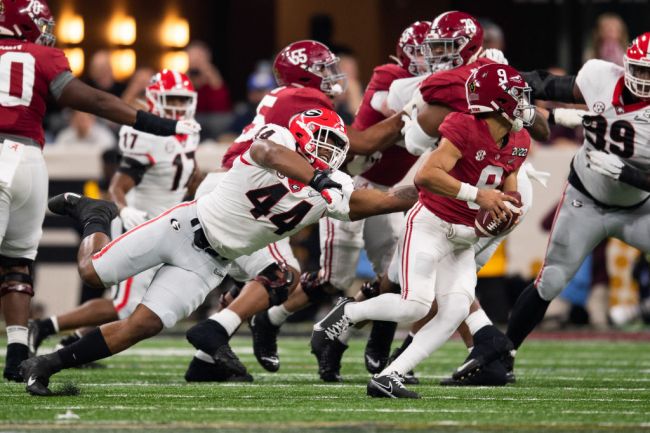 Travon Walker is currently expected to have a very good night on Thursday night. As of yesterday, Walker is the favorite to be drafted 1st overall by the Jacksonville Jaguars.

However, it turns out this might be bad news for a reason other than the fact that he would have to play for the Jacksonville Jaguars.

.@GeorgiaFootball Edge Travon Walker joins the breakfast table and tells the crew about his experience at Georgia, shares which NFL QB he'd love to sack, and talks about his high school basketball career. pic.twitter.com/OkXEWCCWxb

“It almost definitely would have to be Tom Brady. He’s the GOAT (greatest of all time), he’s somebody I’ve watched since I grew up, so it’d be a very special moment just to get that sack on Tom Brady.”

Unfortunately for Walker, it is unlikely he’ll be playing for any team that will take on Tom Brady next season even if the Jaguars go another route on Thursday. The Tampa Bay Buccaneers don’t play the Lions, Texans, Jets, or Giants either next season.

That mean Walker would most likely have to very surprisingly fall to the Panthers, Falcons, or Seahawks in order to ever play against Brady.

The Jaguars will, however, play the Bucs in 2023, which means that Walker might just have to hope that Brady re-signs with the Buccaneers after next season.

Whoever winds up drafting Walker will be hoping he sacks a whole lot of quarterbacks throughout his career. He’ll just need some things to break his way if one of those is going to be Tom Brady.