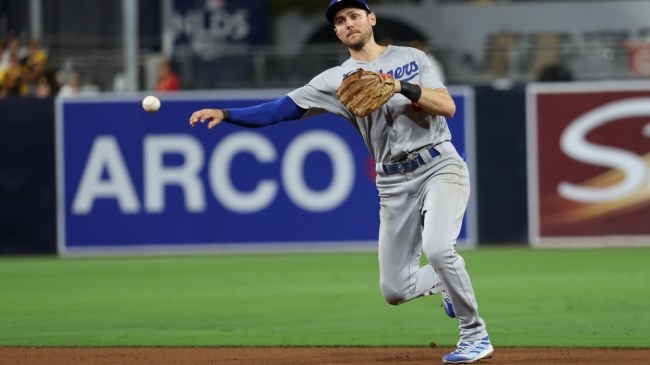 Trea Turner may well be the best shortstop in all of Major League Baseball. The 29-year-old finished second behind only Francisco Lindor of the New York Mets for fWAR among shortstops in 2022. He’s a two-time All-Star, the 2021 NL batting champ, a two-time NL stolen base leader and he’s hit 20-plus home runs in each of the last two seasons.

Oh, he’s pretty darn nifty in the field as well.

All that leads to what’s likely to be a very, very hefty contract for Turner this offseason when he enters free agency for the first time.

Turner is one of the stars of an absolutely loaded free agent class at the shortstop position. He’s joined by Carlos Correa, Xander Boagerts and Dansby Swanson.

It’s arguably the best shortstop free agent class of all time and it’s difficult to separate one player from another. Which is why Turner brought in the big guns to really get his hype train going.

Turner spent the last year-and-a-half playing for the Los Angeles Dodgers after beginning his career with the Washington Nations. While in LA, he got to me a number of A-list celebrities. One of those celebrities is actor Jon Hamm. Hamm, a St. Louis native, is a Cardinals fan. But he’s been spotted at a number of Dodgers games in recent years.

So when Turner needed a way to spark the impending bidding war for his services, he knew just who to turn to.

Turner and his agent sent a highlight video, narrated by Hamm, around to each of the 30 Major League Baseball teams prior to the start of free agency on Nov. 10.

A Trea Turner sizzle reel narrated by Jon Hamm was sent to teams earlier today, and it is awesome. https://t.co/o88re9Fz17

My God. I want to be good enough at something to sign with CAA just so I can have one of these. https://t.co/qXAbJUWdas

This is amazing and I want this for every indy ball grinder on the planet https://t.co/HjAvzgxP2O

It’s hard to say what Turner is worth on the open market right now. But what it is, that number just went up by a couple mil.