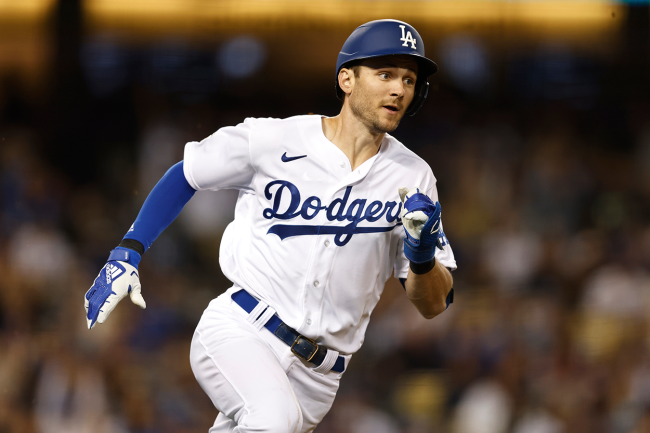 Los Angeles Dodgers shortstop Trea Turner is off to a great start in 2022. The 28-year-old, who was traded from Washington to L.A. in 2021, went viral over the weekend with an incredibly smooth slide.

Through seven games, Turner is hitting .300 with five RBIs and four runs scored with two stolen bases. He is one of the fastest players in Major League Baseball and has been clocked running more than 22 miles per hour on multiple occcassions.

As a result, Turner was the NL stolen base leader in 2018 and 2021. Although there is a lot of season left, he is on his way to being in contention for the title in 2022.

During Friday night’s 3-1 win over Cincinnati, Turner did not swipe a bag but that didn’t keep him from showing off of his wheels. He hit an RBI triple in the bottom of the third inning and proceeded to slide into third base with tremendous swagger.

Over the last few years, Turner has garnered a reputation for being the smoothest slider in the league. In particular, he caught people’s attention shortly after he was traded in August of last season.

And then he followed it up a few weeks later with another ridiculously smooth slide.

And now Trea Turner is back again in 2022 with his effortless, perfect slides.

After knocking a triple to shallow right field on Friday, Turner was caught on a camera sliding into the base. It could not be cooler or more casual and the crispy 4K video makes it that much better.

Another angle of that slide because why not?!

This might have been the first viral slide of the season for Turner, but it surely won’t be the last.