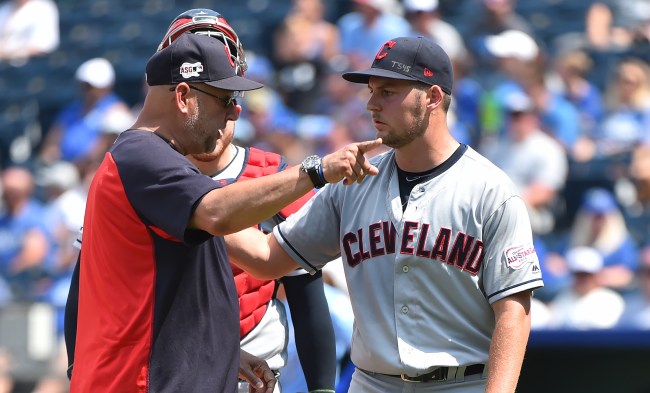 It’s not every day that you see a pitcher get to unleash the full strength of their arms and legs and hurl a baseball as far as they possibly can. If you show up to a game early enough you might get to watch the players warm up with long toss in the outfield but you’d still never see anything like what happened when Cleveland Indians pitcher Trevor Bauer was removed from the game yesterday against the Kansas City Royals.

The Indians lost to the Royals 6-9 (nice) on Sunday with Trevor Bauer taking the recorded Loss. Bauer has been pretty good on the season (3.79) ERA but he didn’t have his best stuff yesterday. He gave up 9 hights, 8 runs, and 7 earned runs while issuing 4 walks (6 strike outs).

When Indians skipper Terry Francona began to approach the mount in the 5th inning to pull Bauer from the game things went south in a hurry. Bauer threw a ball over the centerfield wall from the mound, heated words were exchanged, one of the infield players looked scared as if he was about to take a ball to the forehead.

After giving up a go-ahead, 2-run single, Trevor Bauer chucked the ball… over the centerfield wall 😳

Terry Francona gave the reaction you’d expect to see in this situation, a good old fashioned ‘what the fuck is wrong with you?’ 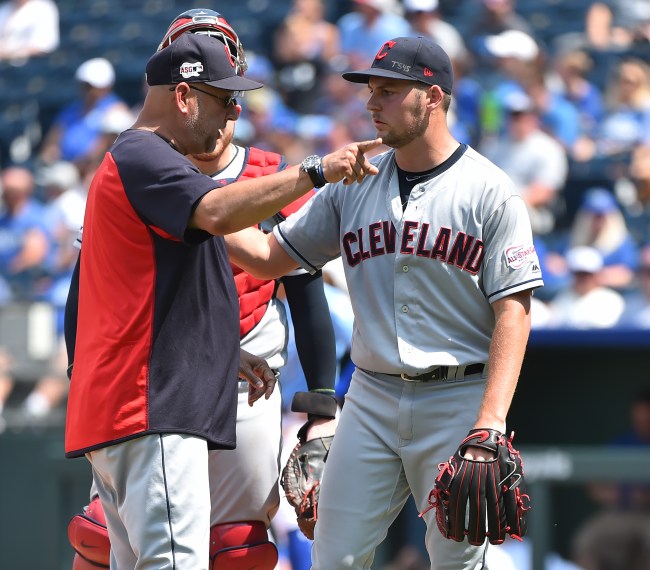 Bauer did apologize after the game, saying it was all in frustration that he threw the ball over the wall. I guess it’s good that he apologized but at the same time, what does any of it even matter? He could’ve just apologized to his teammates and moved on. It’s not like the fans were offended by his actions.

Trevor Bauer opened with an apology before taking any questions after throwing a ball over the center-field wall out of frustration in today’s game: pic.twitter.com/FUMxILdGmd

Trevor Bauer’s clearly been running hot lately. He had a back-and-forth exchange with Mike Francesa on Twitter after Francesa said he doesn’t want the Yankees to trade for the Indians pitcher, calling him a ‘nutcase and a fool’.

Mike Francesa does not want the Yankees to trade for Indians pitcher @BauerOutage, because he's "a nutcase and a fool" who couldn't handle New York. pic.twitter.com/iY9ToS5VYA

Lol nice…tag me in this looking to start drama and I’m the headcase and nutjob and whatever else is said in this video? That’s hilarious! Traditional media for you…this is why it’s dying. I do love the logo in the background tho! If only he looked like that in real life! 🤔😂 https://t.co/ZIBUgqI1pN

It certainly seems like Bauer could use a day at the pool to chill out a little bit, we all could, but Cleveland is 2.0 games back in the AL Central and they’ve got a 3-game lead on the AL Wild Card spot so it doesn’t seem like Trevor will get that day of relaxation until October.