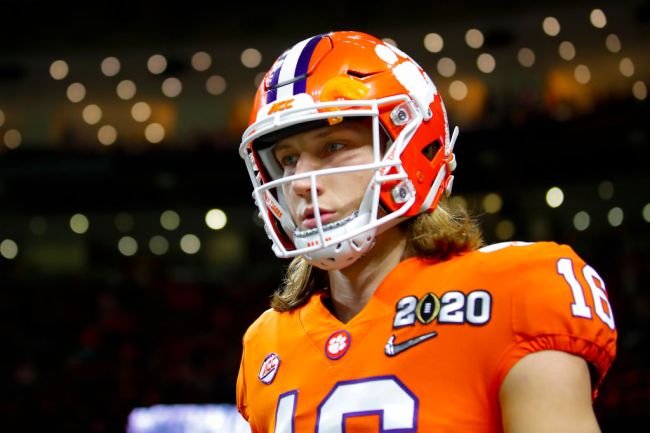 Trevor Lawrence lost two games in three years as the starting quarterback of at Clemson. Two. And of those two losses, not a single one came during the regular season.

Thus, it was unfamiliar territory for the Tigers on Saturday as they fell to the Georgia Bulldogs in the 2021 season opener. DJ Uiagalelei stepped in as the starting quarterback, after losing his collegiate debut in Lawrence’s place last season, and lost again. He is 0-2 as the starter and Clemson is 0-1 this year.

The 10-3 final score may not jump out as a standout game, but it was a tremendous primetime opener— just not for Dabo Swinney’s team, its fanbase, or Lawrence.

Lawrence, who won a pair of Georgia State High School football championships en route to becoming the nation’s top recruit, took his talents across the state border for college. As his home state school and his school played on Saturday, he placed a wager with one (or multiple) of his Bulldog friends.

To pay up on the loss, Lawrence showed up to the Jacksonville Jaguars locker room donning all Georgia gear. He was visibly embarrassed as former Georgia wide receiver Terry Godwin showed him wearing red sweatpants and a 40th anniversary championship hoodie on his Instagram.

Someone in the background chanted “SEC! SEC! SEC!” while Godwin laughed “you look good in red and black, man. I like it.”

Lawrence waved them off and said “I still ride with my guys!” He wanted nothing to do with the Georgia gear but was a good sport about the loss.