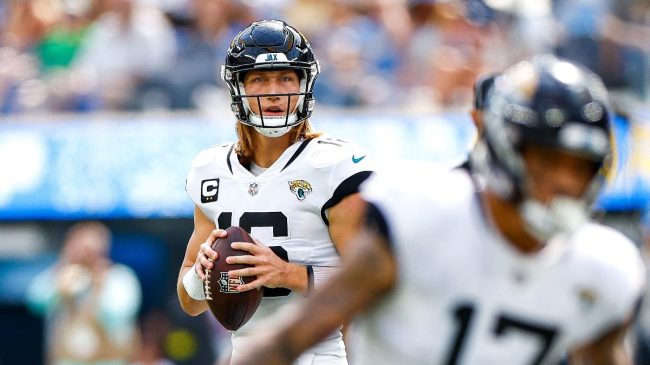 The Jacksonville Jaguars ran the score up on the Los Angeles Chargers in a surprising win. This franchise seems to finally be on the right path toward success. Much of the thanks can go to Trevor Lawrence, as he looks like his normal elite self the last couple of weeks. However, after achieving a win over LA, it turns out Jacksonville’s prospect quarterback might just be the second coming of Peyton Manning.

Jacksonville’s victory snapped a cold streak that the fans are sure to be overjoyed about. The Jaguars had lost nine straight road games with Trevor Lawrence under center. However, he broke the streak after walloping the Chargers on Sunday in Week 3. According to NFL on CBS, Peyton Manning did the exact same thing at the beginning of his career.

The same week, same team, and the same road game streak snapped. That’s absolutely insane and might even prove we live in a simulation. Who knows? The fact is, Trevor Lawrence finally looks like the star quarterback everyone knew he could be. Even Peyton Manning had a slow start to his career and ended up being one of the best to ever play the game.

There’s still a long journey ahead for Lawrence and the Jaguars. Regardless, the fans finally have something to be excited about. Especially considering Jacksonville is currently in first place in the AFC South.

We’ll see if Trevor Lawrence and the Jaguars can maintain momentum, as they head to the northeast to play the red-hot Philadelphia Eagles. If Jacksonville can walk out of that game with a win, then it might be time to start taking this team seriously.