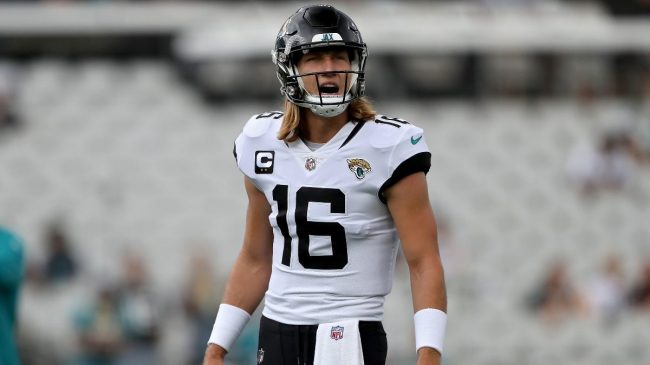 The Jacksonville Jaguars have gotten off to a hot start against the Indianapolis Colts. Their defense is causing mayhem but all eyes are on Trevor Lawrence. Jacksonville’s quarterback has looked phenomenal early on and the fanbase is losing their minds about it.

On the Jaguars’ opening drive, Lawrence threw 100 percent and capped it off with a touchdown pass to Christian Kirk. Jacksonville has looked incredible against the Colts so far and all eyes are on Trevor Lawrence.

He had a ton of hype entering the league and many believe the Jaguars will have that franchise quarterback they’ve been seeking for years. Lawrence torched the Colts’ secondary on the opening drive, giving Jaguars fans hope for a brighter future.

The most classic thing a Jaguars fan can say.

Give the man all of the money!

It keeps happening so it must be true.

Lawrence turns into prime Peyton manning against the colts😹

We’ll see if he can keep up this strong play. There is plenty of time left for the Colts to surmount a comeback. However, Jacksonville has played incredibly well against Indianapolis in recent years. Regardless, Jaguars fans are just excited to have a good quarterback.

If Trevor Lawrence can put the pieces together this year, then he could build momentum for a long, successful career down the road. This opening drive in Week 2 is a great start.