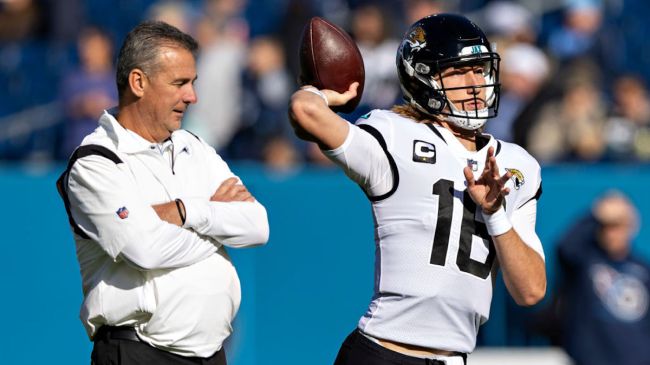 Over the weekend, Doug Pederson’s upstart Jacksonville Jaguars absolutely steamrolled the Los Angeles Chargers, who were a popular preseason pick to win the AFC, by a score of 38-10 (folks, losing by four touchdowns in the NFL is an absolute *beatdown*).

In the game, former #1 overall pick Trevor Lawrence — who truly almost had his career derailed by Urban Meyer during his rookie year — completed 28 of 39 passes for 262 yards and three touchdowns. While it’s hard to reason that Lawrence’s stat line was better than Lamar Jackson’s five total touchdowns, 218 passing yards, and 107 rushing yards, that’s another argument for another day.

The point to take away from Lawrence’s AFC Player of the Week victory in Week 3 is that the 22-year-old former Clemson QB looks every bit of the franchise-altering talent that analysts expected him to be when he was coming out of college, and the reason it’s taken “this long” is simple: he’s no longer playing for Urban Meyer.

Naturally, given Lawrence’s stunningly rapid turnaround, NFL fans have been absolutely crushing Urban Meyer and wondering how bad of a coach he must be if he was capable of making Lawrence look like such a poor player.

“I can’t believe we as a society almost allowed Urban Meyer to ruin Trevor Lawrence,” said one Twitter user.

I can’t believe we as a society almost allowed Urban Meyer to ruin Trevor Lawrence.

Urban Meyer making Trevor Lawrence look like a bad football player might be the most impressive thing he’s done in his career.

“Trevor Lawrence would’ve had a better rookie season if a VHS player was his head coach. It’s frankly unreal how big of a disaster Urban Meyer was,” another NFL fan joked.

Trevor Lawrence would’ve had a better rookie season if a VHS player was his head coach. It’s frankly unreal how big of a disaster Urban Meyer was.

Seeing how Trevor Lawrence has looked thru the first 3 games, it looks like a crime what Darrell Bevell & Urban Meyer did to that young man his rookie season.

Urban Meyer was the problem in Jacksonville, not Trevor Lawrence.

Through three games this season, Lawrence has completed nearly 70% of his passes for six touchdowns and just one interception. Furthermore, the Jaguars are currently in first place in the AFC South.

While the road victory over the Chargers should be enough to prove that they’re legit, the Jags will have a real chance to make a statement on Sunday when they take on the 3-0 Philadelphia Eagles — who many believe can make it to the Super Bowl — on Sunday.

RELATED: Dolphins Coach Is Absolutely Not Amused With The Butt Punt After Delivering Stern Reaction To Hilarious Mishap