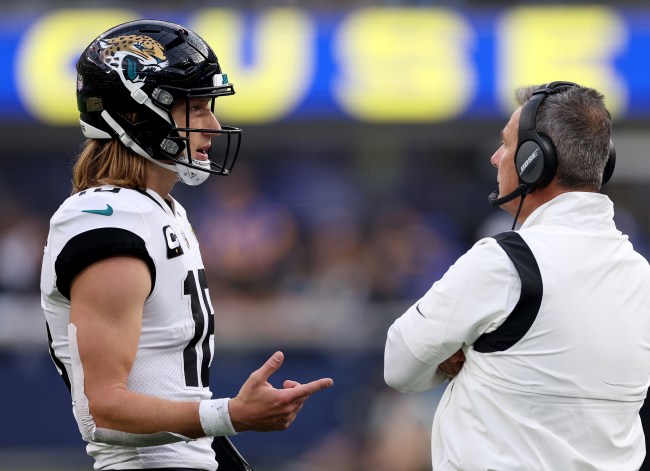 I’m sure that when Trevor Lawrence was dreaming of one day playing in the NFL this disaster of a rookie season wasn’t what he had in mind. His team rarely wins, he’s struggling, and the biggest story about the team came because his coach was getting handsy at a bar in Ohio.

Now, the team has developed a completely unnecessary controversy after seemingly benching James Robinson on Sunday after a fumble. The move has been questioned by just about everybody and when he was asked if he was indeed benched his only response was, “I’d say so.”

Now his team’s rookie quarterback has come to Robinson’s defense in a press conference. Trevor Lawrence told reporters yesterday that Robinson is one of their best players and needs to be on the field.

“In my eyes – obviously, I’m the one that’s out there, I see all the pieces moving, I see the whole picture – bottomline is James is one of our best players and he’s got to be on the field. And we addressed it and I feel like we’re in a good spot; the whole team, we’re good,” Lawrence said “Whatever may have happened – I honestly don’t even know everything that went into it. You know, I’m playing the game. If stuff happens on the sidelines with the coaching decisions I don’t really get into that. But I know and voiced my opinion that James is one of our best players and he’s gotta be in the game.”

This was drama that never needed to exist for the Jaguars, but it just might turn out to be a positive. It’s unlikely that Trevor Lawrence has won over the locker room with his play this year.

However, backing up your teammates to both the coaches and to the media is absolutely a move that will win over your team.

Now Lawrence just needs to turn things around on the field after throwing just 1 touchdown pass since the start of November.