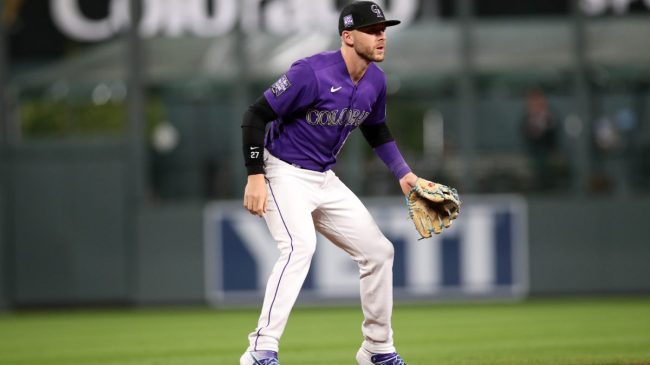 The Red Sox have added another quality bat to the heart of the order.

On Sunday, the team came to an agreement to bring former Colorado Rockies shortstop Trevor Story to Boston. Story has reportedly signed a deal worth $140 million over the next six seasons. The Red Sox add a player that’s recorded two 30-homer, 20-steal campaigns.

It's Story time in Boston!

Trevor Story has reportedly agreed to a $140 million deal with the Red Sox, per @BNightengale pic.twitter.com/Oxp6MsZf33

The seventh-year player hit 24 long balls last year, giving him five seasons with at least 20 home runs. Story is a two-time All-Star who boasts a pair of Silver Slugger awards. The righty should fare well in Fenway Park.

The move shores up the middle of the Red Sox infield, as Story is likely to slide over to second base to team up with shortstop Xander Bogaerts.

While Boston undoubtedly got better, they also kept Story away from one division rival.

The Yankees seemed to be the favorite to land the infielder before the Red Sox swooped in at the last possible minute. With Story off the market, New York signed Marwin Gonzalez.

New York fans weren’t too happy to see Story spurn their offer for a deal with their archrival.

This news shocked many Yankees fans, as they were believed to be the eventual landing spot for Trevor Story. Instead, they’ll have to face him as a division rival in Boston.

Social media was quick to react to New York’s missing out on their shortstop of choice.

Yankees fans dreaming of Carlos Correa or Trevor Story but ending up with Isiah Kiner-Falefa and Marwin González pic.twitter.com/ekRfgqktYo

In recent days, Bogaerts, Cora, other members of the Red Sox worked hard to recruit Trevor Story with phone calls. Story wanted to land someplace where he has a chance to win.

Red Sox fans waking up this morning with Trevor Story on the roster: pic.twitter.com/AmwpQniuyK

Now that Trevor Story signed with the Red Sox who grew up idolizing Derek Jeter, can we stop thinking players will take discounts to be Yankees? It’s time to start making the best offer on good players

Yankee fans Waking up to the Trevor story news…. pic.twitter.com/mtsYqXy6Du

So not only did the Yankees not sign Trevor Story, they allowed their most hated rival to sign him?

Even Aaron Judge was upset that the Yankees weren’t able to close the deal.

Aaron Judge on Boston’s signing of Trevor Story: “I'm not too excited about it. I know what that guy can do. … It's going to be fun. If we do our thing, I think we'll be in a good spot.”

It should be fun watching Story in Boston. At least for everyone but Yankees fans.