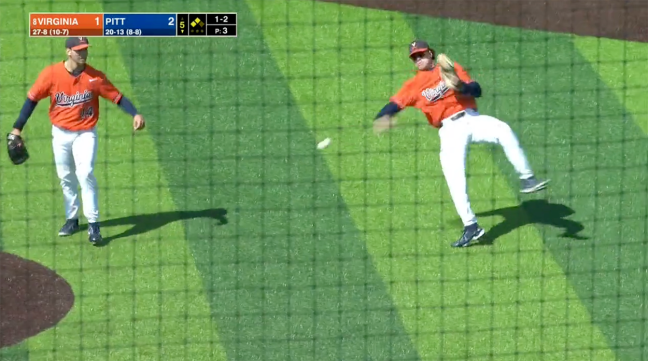 Although Virginia baseball didn’t get the result it wanted on Sunday, the Cavaliers pulled off one of the craziest plays of the year. A bizarre brain-lapse led to a triple plays that is so wacky that it’s hard to score.

During the bottom of the fifth inning, Pittsburgh first baseman Bryce Hulett stepped up to the dish with the bases juiced and no outs. After falling behind 1-2 in the count, Hulett made contact and sent a low-and-outside pitch down the third base line.

On the defensive end, Virginia third baseman Jake Gelof fielded the ground ball and threw home for the first out. Catcher Kyle Teel stepped on the plate, turned to his right and threw a laser to first that beat Hulett to the bag for out number two.

At that point, Cavaliers first baseman Devin Ortiz forgot how many outs there were in the inning. After completing the 5-2-3 double play, he tossed the ball toward the mound and headed toward the dugout.

Except it wasn’t the third out and there was a runner still on base who continued to run the bases. As the Pittsburgh baserunner took off to try and score, Ortiz realized his mistake.

To make up for the blunder, he ran and scooped up the ball, turned home and fired to Teel at home. His throw beat the runner for the third out of the inning, all on the same play.

Virginia baseball’s triple play against Pittsburgh was equally as bizarre as it was awesome, take a look:

Hoos escaped a bases loaded jam unscathed in the 5th!

Fortunately, Ortiz was quick enough to figure out his mistake. If he hadn’t, it would have been an all-time epic fail. Instead, it was an all-time wild moment that turned into one of the rarest plays in the sport.