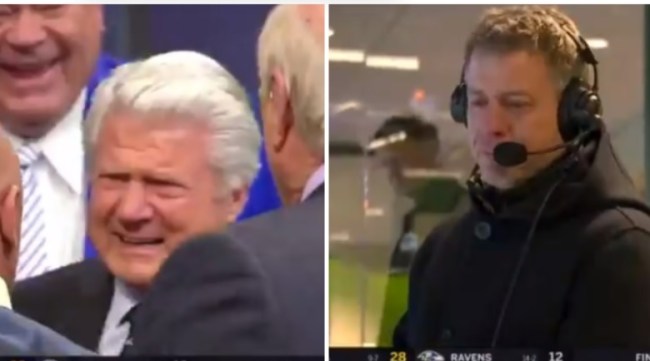 On Saturday night Bill Cowher was surprised when he was told on-air that he was being inducted into the Pro Football Hall of Fame. On Sunday night it was Jimmy Johnson’s to get surprised.

During halftime of the Seahawks-Packers, the former Dallas Cowboys head coach learned that he was finally becoming a hall of famer.

Legendary @dallascowboys coach @JimmyJohnson finds out live on TV he is the newest member of the Pro Football Hall of Fame! pic.twitter.com/GK3jlSlWRz

Jimmy Johnson learning that he's joining the the Hall of Fame live on TV is such a good moment 😭 pic.twitter.com/66fJpW5rgJ

Troy Aikman, who played for Johnson, teared up watching his former coach get emotional about his induction into the hall of fame.

Even Troy Aikman teared up when Jimmy Johnson learned he was making the hall of fame pic.twitter.com/oYnKMDCvEQ

Here’s a longer clip of Aikman wiping tears away from his eyes.

Such an awesome moment.