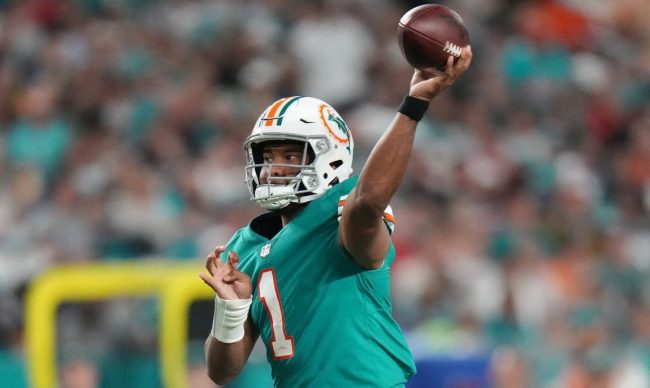 The Miami Dolphins got hit hard with some news on Tuesday after the NFL delivered a tampering punishment to the franchise. Due to illegal tampering, the league has taken the club’s first and third-round picks away in the 2023 NFL Draft. This is not an ideal situation for Miami.

However, it sounds like Tua Tagovailao walk away as a winner from this ruling.

According to Nate Davis, the loss of draft picks reduces the possibility of the Dolphins drafting a rookie quarterback next year. Although Tagovailoa is in line to be the starting quarterback, his future with the organization is a bit murky. For that reason, he still must prove himself after the front office stacked the roster.

If there's any good news out of #Dolphins tampering ruling, maybe it's for Tua Tagovailoa given Miami loses critical draft ammo in 2023, '24. Fins still own 49ers' first-rounder next year, but that's not likely to be very high. Much tougher to trade up for a QB in all likelihood.

Everything hangs in the balance of Tua Tagovailao’s performance this season. If he plays well, then the Dolphins don’t have to worry about finding a replacement. However, if he fails to live up to expectations, Miami might be in the market for a new quarterback. If the front office opts to move on from Tagovailoa, it will be much more difficult now with the NFL taking away their first and third-round selections in the 2023 Draft.

We’ll see how it all plays out, as Miami aims to take over the AFC East. They’ll have their hands full with the Buffalo Bills. Regardless, the Dolphins are hopeful for a strong season after falling just short of the playoffs two years in a row. Luckily they have the roster they do, as losing these valuable draft picks is a huge loss to this franchise. Even so, Tua Tagovailoa walks away a winner as this tampering punishment reduces the chances of the front office replacing him next year.