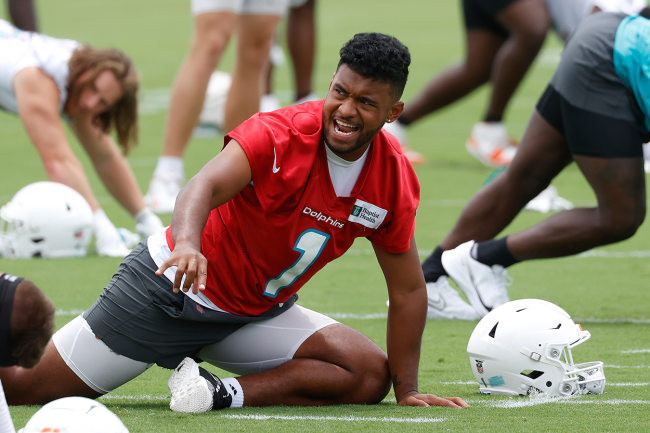 Tua Tagovailoa has a lot of things to worry about ahead of the 2022 NFL season. The 24-year-old Dolphins quarterback is hoping to prove the haters wrong and has high expectations on his shoulders after Miami added Tyreek Hill during the offseason.

He did not want his marital status to be another distraction or storyline. But it did.

According to Broward County Clerk of Courts records, Tuaniga Donny Tagovailoa married Annah Concetta Gore on July 18th. The marriage was made official just 10 days before the start of training camp and it was a big surprise.

Most people did not know that Tagovailoa had a girlfriend, let alone one so serious. Prior to the leaked information about his marriage, Google didn’t even have any information on his wife and did not link the two together other than the fact that they both went to Alabama.

Despite every effort to keep his personal life a secret from the media, word got out. When asked about the news during training camp on Wednesday, Tagovailoa was not thrilled— and that may be an understatement.

In response to the question, the former No. 5 overall pick got very sassy. Tagovailoa said that he would have preferred the news stay private and even called it “disrespectful.”

To follow-up, Tagovailoa was asked if marriage brings him new perspective. He didn’t have anything in particular come to mind, but he offered a hilarious quip about how girls won’t be something that distracts him from his play.

Tua Tagovailoa on word getting out of his marriage, which he would’ve preferred to keep private.

And funny response to how it changes his perspective. pic.twitter.com/1rDjrfEwJe

While Tagovailoa’s request for privacy is fair, he should have known what was coming. Nothing in today’s world can be kept a secret, especially if you’re a high profile quarterback.