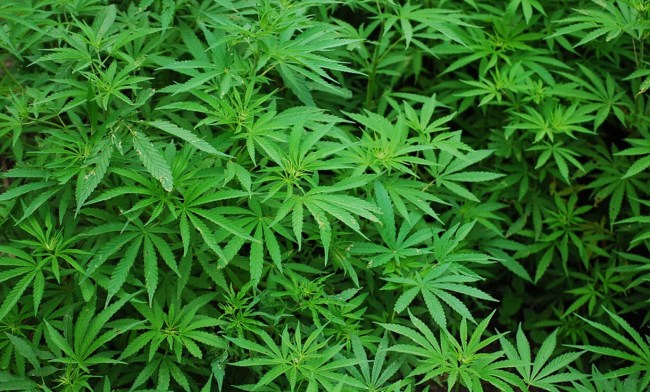 Here’s a new one to put in your “We’re still arresting people for growing and/or smoking weed?” file. A TV helicopter tracking cyclists competing in a internatinal bike race in Spain unwittingly exposed an illegal rooftop marijuana plantation, leading to the owner’s arrest.

While broadcasting the last kilometer of the eighth stage of the Vuelta a Espanya cycling race on Saturday, a helicopter was transmitting the view from above as cyclists raced for the finish line.

As the riders made their way through the streets of the town of Igualada, many other things could be seen around and on the rooftops of the surrounding buildings: swimming pools, basketball courts, 40 large marijuana plants…

Yep, there they were around the 35-second mark in the video of the broadcast below.

In case you are having trouble, the Unified Association of Civil Guards (the national police force of Spain) was nice enough to make it crystal clear in a tweet.

As one might figure, the video of the marijuana plants on the rooftop went viral on social media in Spain, leading police to seize the 40 plants and launching an investigation.

“We received information thanks to the images that individuals posted on social media that had been taken from the helicopter of La Vuelta,” a Mossos spokesperson told ESPN.

“That has helped us to seize 40 marijuana plants. No one has been arrested, but the investigation is still ongoing to find those responsible.”

However, as ara.cat reported (as translated by Google)…

Municipal sources consulted by the ARA have explained that at the end of last week the neighbors of this block warned the local police that the people who were occupying one of the floors had emptied it and had left all the furniture in the street before to leave. Of these people, there was no longer a trace, but of the devices they had thrown in the containers.

There was no longer a trace of them. Go figure.

Local media did note that while it isn’t illegal to grow marijuana for personal use in Spain, it is, however, illegal to traffic in it and there are limits to how large a home plantation is allowed to be, which could result in fines for the not-sneaky-enough weed farmers.

I don’t think you need to know Spanish to understand some of the comments that were made about the video on Twitter.

Translation: “Hahahahahaha, they will hate cycling the rest of their lives.”