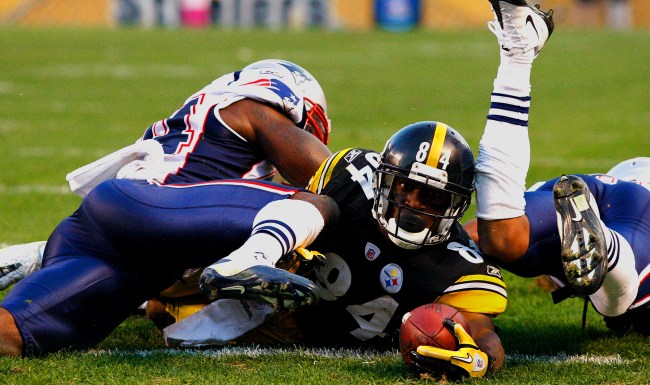 With all of the drama surrounding Antonio Brown and the Oakland Raiders, NFL fans are reminded of another elite-level wide receiver who also had some issues with playing for the Silver and Black: Randy Moss.

As you may recall, Moss was traded to the Oakland Raiders in 2005 and was immediately a cancer in the team’s locker room, posting some of the worst numbers of his 14-year career.

You may also recall that despite Moss being a bad teammate in Oakland, Bill Belichick and the Patriots were more than happy to have him and in his first with New England Moss went off for 98 catches, 1,493 yards, and scored an astonishing 23 touchdowns.

So, naturally, people on the internet are just assuming what all NFL fans believe to be inevitable: Antonio Brown will be joining the Patriots at some point in the near future.

And why wouldn’t they? Brown and Tom Brady loooooooove each other.

Missed this from earlier this week but @AB84 Antonio Brown shared a private DM from #Patriots QB Tom Brady that was sent in September.

By the way, this whole helmet ordeal? This isn’t the first time AB has received attention for not wearing a helmet.

Anyway, on to the jokes about Brown ending up with the Patriots.

Antonio Brown’s plot to end up with the Patriots is pure genius.

Hate to say this but im afraid this is how this all turns out..

Raiders are gonna cut AB.. get their money back… then Bill Belichick is gonna swoope in and WHAMMY. @AB84’s a Patriot doing things the Patriot Way out of nowhere. pic.twitter.com/sK6orRGVKr

This all ends with Antonio Brown on the Patriots, doesn't it?

If the #Raiders end up releasing Antonio Brown and the #Patriots are interested in signing him, this is how I assume the meeting will go between Brown [DiCaprio], Belichick [Wahlberg] and Kraft [Sheen]pic.twitter.com/SAdnJbrwAq

The rest of the NFL watching Josh Gordon and Antonio Brown put up 80/1200/10 and lead the Patriots to a 7th Super Bowl pic.twitter.com/SmKUoh2vXQ

Antonio Brown becomes a free agent
The patriots be like: pic.twitter.com/CScc2cHEnJ

Can’t wait til I get to tweet that the Patriots are paying Julian Edelman, Josh Gordon, Antonio Brown, Demariyius Thomas, and N’Keal Harry less than what Cleveland is paying Odell Beckham Jr.

“And the Patriots have now won another Super Bowl with Josh Gordon and Antonio Brown combining for 800 yards against the Saints. How do they keep doing it?”

Antonio Brown will bomb out on the Raiders just like Randy Moss did. Then there will be this whole contrition tour after the Patriots inevitably sign him, and then he'll have 38 TD catches the next season.

This feels like Antonio Brown will be a Patriot next year for a conditional 6th Rd pick.

NFL fans knowing Antonio Brown will be a Patriot delinquent convert by the end of the season pic.twitter.com/A79xlsnOU7

We laugh to keep from crying.