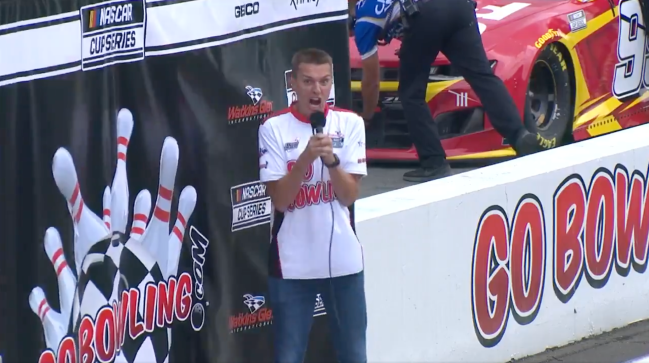 Wilbur Shaw stood in front of a packed crowd at the 1953 Indianapolis 500 and proclaimed, “gentlemen, start your engines!” At nearly every race since, in both Indy and NASCAR, a variation of Shaw’s famous phrase has been given.

The command signifies that the race is soon to begin and that drivers should get their cars running and settle in. It is often a reason for the race to bring a celebrity before the fans and get them riled up.

That was exactly the case on Sunday at the Watkins Glen International. YouTuber Tyler Hoover spoke— rather, screamed the famous command in exhilarating fashion before collapsing to the ground.

If your blood isn’t pumping and you aren’t ready to run through a wall after watching Hoover’s performance, you need to check your pulse.

Did @HooviesGarage just deliver the best command of the year? pic.twitter.com/UFYtU33dN4

Hoover, better known from his channel Hoovie’s Garage, is a 31-year-old race enthusiast. He has a collection of over 100 cars and decided to make a channel surrounding his journey of sourcing, repairing and driving his vehicles.

Hoovie’s Garage has racked up over 1.2 million subscribers since he began in 2016. Hoover is a fairly recognizable figure across the car space and gave a phenomenal rendition of the four famous words.

Other (bigger name) celebrities have given the command in the past. James Franco gave a funny one back in 2013 when Danica Patrick was the only female driver.

It seems as though 2013 was a great year for commands because Brian Baumgartner will get you fired up.

Four years prior, Mike Rowe of Dirty Jobs gave one that NASCAR fans have long touted as one of the best.

The best, however, is generally agreed to have come from Matthew McConaughey, which should surprise no one.

No matter who is giving the command, Hoover will forever be near the top when it comes to greatest in history. His full-voiced projection and proceeding crumble is exhilarating.