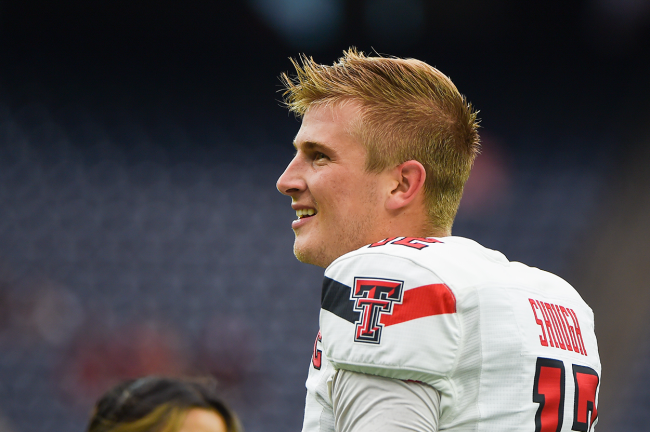 Redshirt junior Tyler Shough expected to be the starting quarterback for Texas Tech this fall. When that happens, and he takes the field in Week 1, it will be the first time that he takes the field as an engaged man after using a unique NIL deal to propose.

Shough, who was a four-star recruit out of high school, committed to Oregon and redshirted as a freshman in 2018. He served as the backup to Justin Herbert in 2019 and started during the COVID-shortened year in 2020 before transferring to Texas Tech in 2021.

While in Eugene, Shough met his girlfriend Jordan Wormdahl, a former soccer player for the Ducks. Today, they are engaged to be married.

Over the summer, Shough and Wormdahl were on vacation in Cabo San Lucas when the former asked the latter to join him for a photoshoot on the beach. He lied and said that he needed to get a few pictures in some new outfits for Instagram as part of an NIL deal that he had agreed upon.

In reality, he had another NIL trick up his sleeve. Although Wormdahl was not initially interested in going with him, because she wanted to lay on the beach, Shough was consistent and she eventually agreed.

Little did Jordan Wormdahl know, it was about to be one of the biggest days of her life and Tyler Shough was planning to propose.

He did, and she said yes. After popping the question, Shough posted on Instagram and thanked Thacker Jewerly for their help in the process, calling them the best jewelers in Texas.

As it would turn out, the thank you was more than just a thank you. It was an NIL deal.

Shough, with the help of Excel Sports Management and the Texas Tech compliance department, arranged a deal with Thacker. At first, when he initially had the idea, he called around to jewelers in the Lubbock area and shared what he was thinking.

Quite a few of the jewelers that he called were skeptical. But Thacker agreed and one thing led to another.

Shough got his now-fiancée the ring of her dreams, got engaged, and did so — in part — through NIL. Brilliant!