Tyrann Mathieu Pays 1 QB The Ultimate Compliment: ‘I See A Lot Of Tom Brady In Him’ 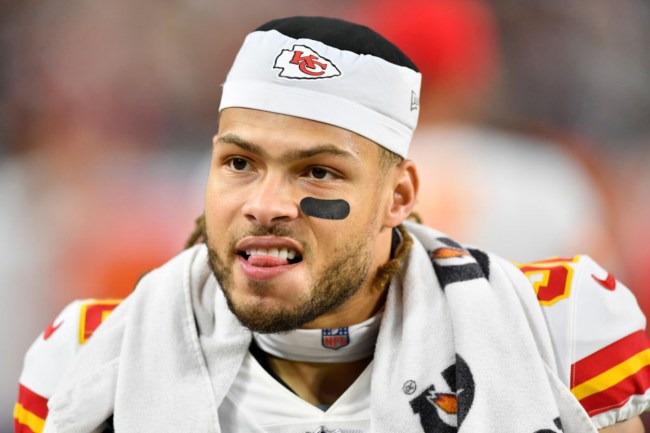 Tyrann Mathieu has plenty on his mind right now given his free agency status, but that doesn’t mean he doesn’t have time to pay a compliment to one of the great young quarterbacks in the NFL.

Mathieu recently joined ‘The Jordy Culotta Show’ and reflected on the Chiefs’ loss to the Bengals in the AFC title game. Specifically, Mathieu made not of how tough it was to keep Joe Burrow in check before paying him the ultimate compliment.

“It was tough to stop Joe,” Mathieu told Culotta. “The league is built for guys like Joe and Ja’Marr [Chase]. When you piece together the mental and smarts of the game, he will be doing that for a long time. I see a lot of Tom Brady in him. He doesn’t flinch.”

Mathieu is an LSU guy just like Burrow, but his compliments about the QB certainly seem genuine. There’s also the fact that just about everyone started saying Burrow reminded them of Brady during the Bengals’ playoff run last season.

Mathieu and Kansas City didn’t find too much success against the Bengals last season as they lost to them in both of their matchups.

Burrow was stellar in the season opener against the Chiefs going 30-for-39 in the air for 446 yards, four touchdowns, and zero interceptions. Kansas City contained him much better in the AFC Championship game, but Burrow and the Bengals still got the best of the Chiefs punching their ticket to the Super Bowl.