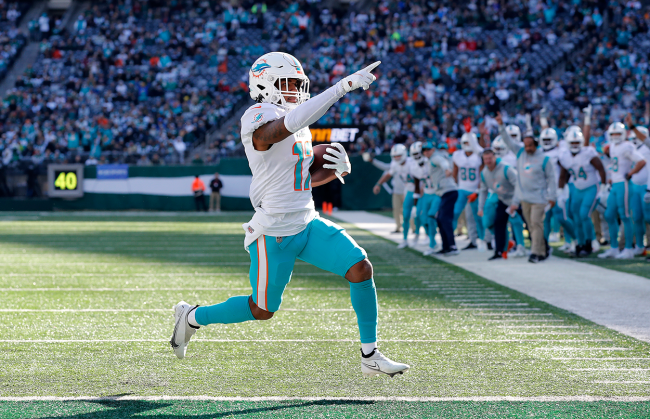 The Miami Dolphins got a lot better during the offseason. Not only did they bring in a young, offensive-minded coach to work with Tua Tagovailoa, but they surrounded their signal-caller with weapons.

Of the most notable moves, Miami signed running back Raheem Mostert and traded for wide receiver Tyreek Hill. By adding ‘The Cheetah,’ the Dolphins now have one of the fastest receiver duos in the league with Jaylen Waddle.

Hill has long been considered the fastest man in football. Waddle ran a 4.37-second 40-yard dash.

They are both absolute blazers. However, everybody wants to know who of the two is faster.

That includes Hill and Waddle themselves. Shortly after being dealt from Kansas City to Florida, the newest Dolphin challenged his younger position group counterpart to a race.

Now, on a new episode of the ‘I Am Athlete’ podcast, Waddle accepted his elder’s challenge and confirmed that a race will happen. He even joked that he has been working his legs to get stronger and faster since the day that he found out about the Hill trade.

The @cheetah challenge has been accepted by @D1__JW. Listen to our chat on @IAMATHLETEpod tomorrow at noon. pic.twitter.com/fyO7ppVwdz

Waddle also mentioned that Mostert will likely want to join in on the action and make it a three-Dolphin race. Hopefully we can get video of the event because Hill talks a big game and he will have to put his speed where his mouth is! Neither Waddle nor Mostert are going to be easy to blow past!