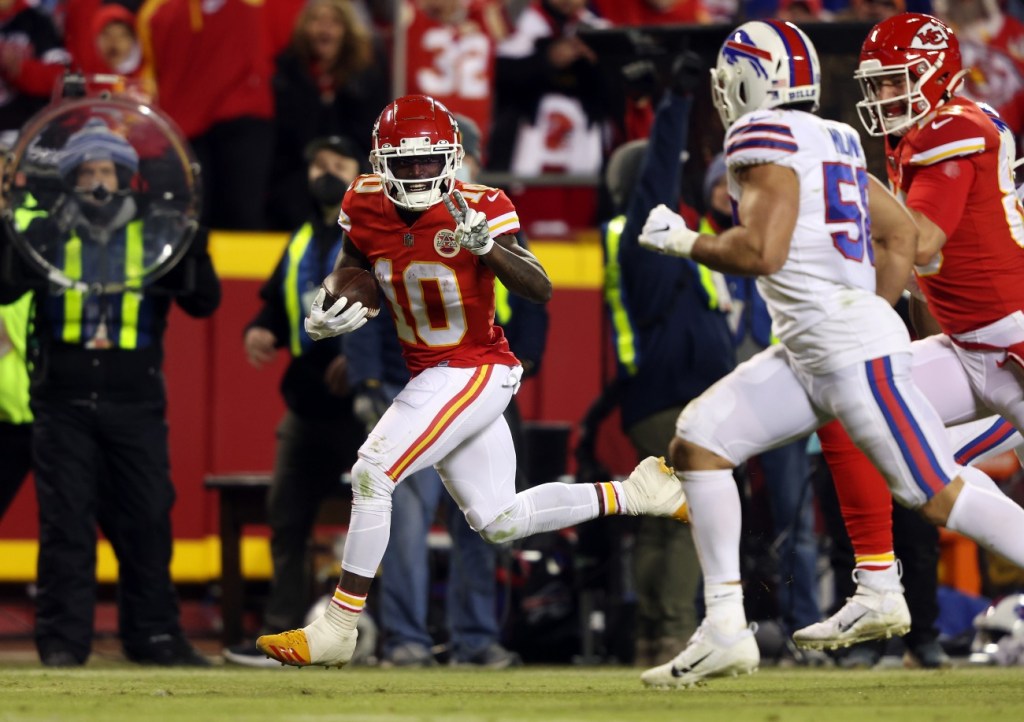 The Kansas City Chiefs vs. Buffalo Bills Divisional Round game was arguably the most exciting offensive NFL game in years. At the very least, the closing minutes of the game and overtime was one of the most insane offensive battles in modern NFL history even if the defenses were completely gassed and virtually non-existent.

Tyreek Hill had 150 yards and 1 touchdown in that AFC Divisional Playoffs game as the Chiefs beat the Bills 42-36 and got sweet revenge over their Week 5 38-20 loss to the Bills at Arrowhead Stadium. Hill had 7 receptions for 63 yards in that loss against Buffalo that served as a catalyst for the team’s turnaround.

On episode 6 of his It Needed To Be Said podcast, Tyreek Hill welcomed Buffalo Bills safety Jordan Poyer onto the show. It’s an interesting guest for the podcast given how contentious the Chiefs-Bills rivalry was last year. And during the conversation, Tyreek Hill revealed how it was offensive coordinator Eric Bieniemy who inspired the team to get revenge on the Bills in the playoffs.

Tyreek’s quotes (via PFT) are below the full video here:

Tyreek Hill: “Our offensive coordinator Eric Bieniemy, like he’s a madman. He was cussing us out all week. Saying, ‘Y’all let these MFs come in here and whoop y’all like that. Like, c’mon man, y’all gotta have some respect on y’all name in this building, in this organization,’ and stuff like that.

And, like, I could just sense in the guys’ eyes and hearts, and I just felt the energy. Like guys like really took that and like ran with it, the whole week. Like practice was perfect. No drops like during the whole week. Defense was flying around. Everybody was doing what they were supposed to do. And we all were on the same page.”

Eric Bieniemy has been the Offensive Coordinator for the Chiefs since 2018 and was the team’s RB coach before that. He oversaw the Chiefs’ Super Bowl LIV win against the San Francisco 49ers. Bieniemy was handed a generational QB talent in Patrick Mahomes but he’s clearly got the offensive tools to win it all as a coach. It’s absolutely shocking that he hasn’t landed a head coaching position yet.

This will be Tyreek Hill’s first season since 2017 where he’ll be running plays that aren’t called by Bieniemy. Dolphins offensive coordinator Frank Smith previously worked as a OL coach and run game coordinator (Chargers), and a Tight Ends coach for the Raiders and Bears. It’ll be interesting to see how Tyreek Hill adapts to catching passes from Tua in an offense ran by a rookie coordinator.