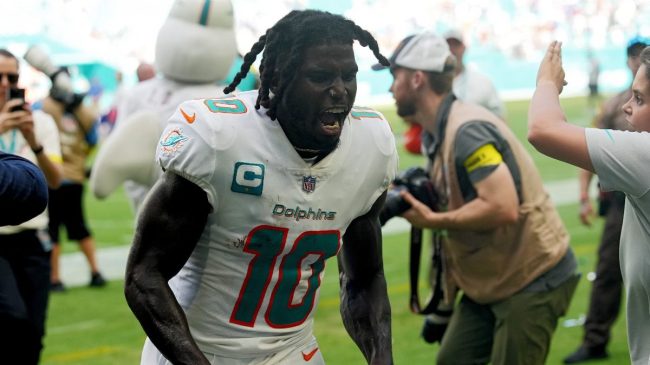 The Miami Dolphins are looking like one of the best teams in the league right now after fending off the Buffalo Bills. Tyreek Hill has been amazing once again but seems to have some extra motivation for Week 4. Miami will take on the Cincinnati Bengals on Thursday Night Football, and the superstar receiver has a message for Eli Apple.

According to Yianni Kourakis, Hill is extremely excited to play against Cincinnati. The main reason is that he seeks revenge on the Bengals cornerback Eli Apple. Last year in the playoffs, it was Apple who prevented Tyreek Hill from scoring a touchdown late in the second quarter. It prevented the Kansas City Chiefs from going up 28-10.

In the second half of that game, the Bengals were able to bounce back and defeat Kansas City. Many view that second-half tackle by Apple as a huge reason why Cincinnati was able to upset the Chiefs. Now, Tyreek Hill has a chance to redeem himself on Thursday Night Football.

It should be an interesting matchup. Especially considering Hill has been lights out so far. Apple is a known trash talker, despite his numbers being mediocre. Regardless, the Bengals cornerback has gotten under Tyreek Hill’s skin and it should make for a fun game on Thursday.

Look for these two to go at it. Hopefully, they can maintain their composure and battle it out in all four quarters. We don’t want another Mike Evans-Marshon Lattimore situation on our hands.