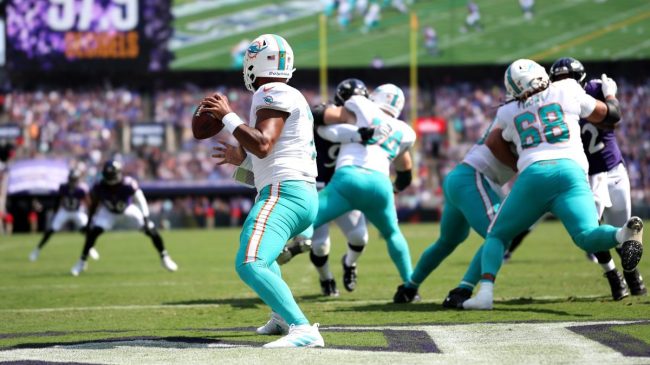 Tagovailoa had suffered through two mediocre seasons after being selected by Miami with the fifth pick in the 2020 NFL Draft. But 2022 was supposed to be different. Tagovailoa has the undying support of superstar wide receiver Tyreek Hill and new head coach Mike McDaniel.

The third-year QB began to repay that faith with a 23-of-33, 270-yard and one-touchdown performance in a Week 1 of the New England Patriots.

But nobody could’ve predicted what the Alabama product would do in Week 2.

Tagovailoa led the Dolphins from a 35-14 fourth-quarter deficit to a miraculous 42-38 victory over the Baltimore Ravens. He threw four touchdowns in the fourth quarter alone and finished the game 36-of-50 with 469 and six touchdowns.

The performance earned him AFC Offensive Player of the Week honors as well as one other special recognition.

Just about every 90s kid grew up watching Nickelodeon. Whether it was Nick GAS shows like Guts (Gotta have it!), Legend of the Hidden Temple and Double Dare, or cartoons such as CatDog, Angry Beavers and Aaahh!! Real Monsters, we all had our favorite Nick shows.

Which means that at one point, every 90s kid wanted to get slimed.

Tagovailoa got to live out that fantasy on Wednesday. Nickelodeon named the Dolphins QB its Week 2 NVP and the Dolphins celebrated the best way possible.

But Tagovailoa was sure to share the love with his No. 1 supporter. He sought out Hill and gave him a big, slime-covered hug after breaking the team down.

Tagovailoa was the second NVP of the season after Minnesota Vikings wideout Justin Jefferson. Though Jefferson avoided the slime after head coach Kevin O’Connell took one for the team.

Personally, we think Jefferson is missing out.