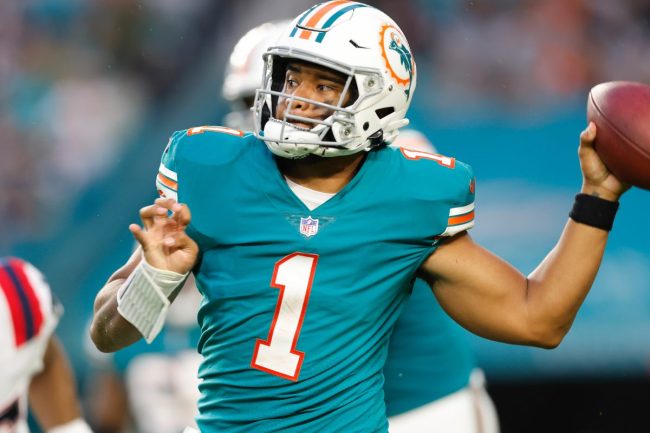 Tua Tagovailoa has received both praise and criticism throughout the 2022 offseason.

The passer, who’s entering his third year in Miami, is set to have the top statistical season of his young career. The Dolphins added a ton of playmakers to the offense, picking up wideout Tyreek Hill and running back Raheem Mostert. That pair, combined with Jaylen Waddle, could provide Tagovailoa with the fastest set of skill players in the NFL.

And his new pass catcher has had nothing but compliments for the quarterback this offseason.

Hill has gone on record as saying that Tua is the most accurate passer in the NFL. That includes the lefty topping Hill’s former signal caller, Patrick Mahomes.

That’s where much of the criticism of Tagovailoa has stemmed, with players and media now taking every chance possible to take a jab at Tua’s accuracy.

Now, though, it seems Tagovailoa has a second supporter in his new head coach Mike McDaniel.

First-year Dolphins’ head coach Mike McDaniel is doubling down on Tyreek Hill’s assessment of Tua Tagovailoa, saying he throws the “most accurate ball” he’s ever seen.

Here’s what he had to say in an interview with Dan LeBatard.

“The skillset’s crazy. I mean the dude is right-handed and he throws lefty. And when he throws the ball, every lefty I’ve ever been with, the ball kind of tails… His doesn’t. It’s the most accurate, catchable ball I’ve ever seen.”

Of course, as everything involving Tau’s accuracy and performance does, the comments caused quite a raucous on social media.

Many jabbed the 49ers, too, saying that McDaniel’s opinion has been distorted from having to watch Jimmy Garoppolo while coaching in San Francisco.

He has spent the last couple years with the Niners, so his judgement might be a little distorted

That’s what years of Jimmy G does to a coach