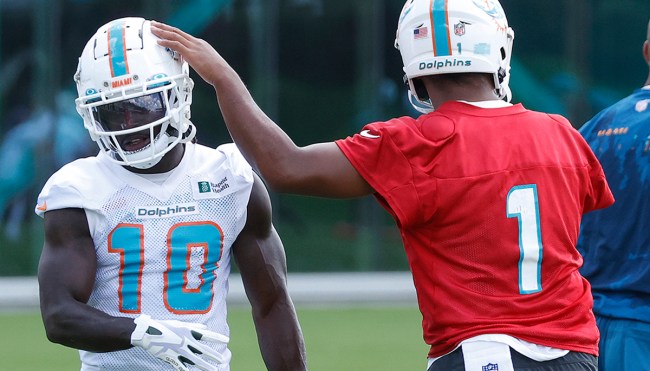 Tyreek Hill has been one of Tua Tagovailoa’s most vocal advocates since he was sent to Miami in a blockbuster trade between the Chiefs and the Dolphins, and you have to imagine the young quarterback is glad to finally have a big-name supporter in his corner following a couple of fairly tumultuous seasons in the NFL.

The wide receiver has repeatedly gone out of his way to hype up his QB to the point where he claims he received death threats from people online after implying the Alabama product has Patrick Mahomes beat in the accuracy department.

There’s little doubt Hill is hoping this steady stream of praise will help Tagovailoa become a bit more confident in the pocket, although you do have to wonder if things will ultimately end up backfiring if either of them fails to live up to expectations when the season kicks off.

You also have to wonder what was going through Hill’s mind when he provided the world with an update concerning the “connection” he and Tua have been able to cultivate as they gear up for the start of the campaign.

Tagovailoa served as Hill’s guest of honor on the most recent episode of the latter’s It Needed To Be Said podcast, and the WR almost left his QB speechless when he deployed a very interesting analogy to describe the kind of connection fans can expect this season.

As the conversation came to an end (around the 38:15 mark in the above video), Hill said fans “should expect a Dennis Rodman and a Carmen Electra connection,” which caused Tua to crack up before suggesting it might be better to view him as the Michael Jordan to Hill’s Rodman.

If you watch the clip, it’s pretty obvious Hill was just joking around (he also made a very solid “receiver” joke after insisting he didn’t want to be viewed as the Carmen in the relationship).

With that said, it’s safe to say Tagovailoa’s analogy is probably a better one to go with when you consider Rodman and Electra had a famously tumultuous relationship—one that saw Rodman attempt to annul their marriage nine days after the ceremony and the two of them getting arrested at a hotel in Miami over an argument that started when Electra tried to shove a piece of pasta up his butt.

So, uh, yeah. I think the MJ-Rodman comparison is going to be a better bet.