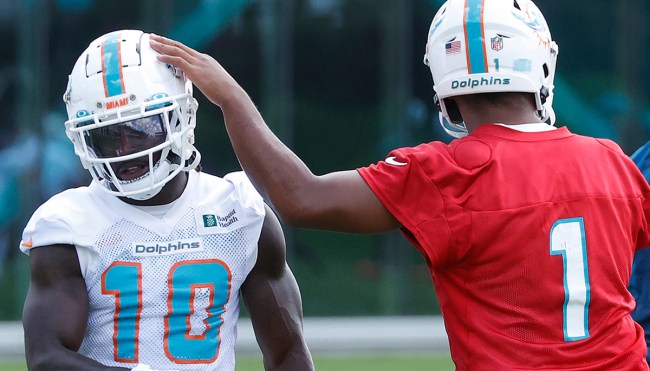 This year’s NFL offseason has been filled with plenty of pretty surprising developments, which included Chiefs wide receiver Tyreek Hill getting shipped off to Miami in March after Kansas City declined to give the standout wideout the new contract he felt he deserved.

It didn’t take long for Hill to start hyping up his new QB after swapping Patrick Mahomes for Tua Tagovailoa, who he described as “one of the most accurate quarterbacks in the NFL” at his introductory press conference with the Dolphins.

It’s safe to say plenty of people didn’t exactly agree with his take concerning Tagovailoa’s skill set, as he has posted some fairly respectable numbers during his first couple of years in the league but still has plenty to prove as he gears up for his third season.

Hill managed to raise even more eyebrows earlier this month when he said that Tagovailoa would be his go-to guy over Mahomes if accuracy was the only factor in the equation. Mahomes admitted he was “surprised” to hear that was the route his former target would opt for when asked about the comments, which is a far more reasonable response than the reaction at least a few other people apparently had.

The man known as “Cheetah” made those remarks during the inaugural episode of his It Needed To Be Said Podcast, and he and co-host Julius Collins kicked off the second one by addressing the fallout—including some truly wild DMs the WR said he received as a result.

I just feel like a lot of people overreacted for no reason… They really didn’t see what I said. A lot of people are just acting off emotion.”

Hill went on to begrudgingly clarify the comments that didn’t really need much clarification when viewed in context, saying:

But right now, I’m going into a new season with a new quarterback who’s trying to head in the same direction as Patrick and do great things and lead this team to a Super Bowl championship who’s also great, in my opinion.

He just doesn’t have the accolades as of yet. I believe in him.”

Unfortunately, the Chiefs and the Dolphins won’t meet in the regular season this year, but Tua will still have plenty of chances to live up to Hill’s hype (or run the risk of making both of them look awful by failing to do so).