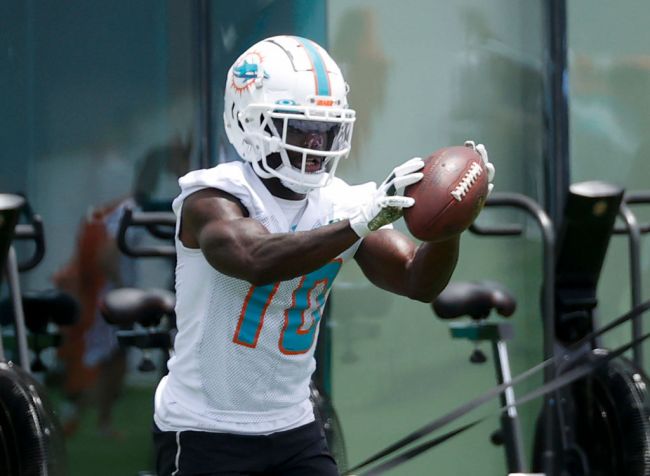 When Tyreek Hill was traded from the Kansas City Chiefs to the Miami Dolphins, it was inevitable that fans would begin making comparisons between Patrick Mahomes and Tua Tagovailoa. Unsurprisingly, it’s a comparison where Tua hasn’t measured up particularly well according to fans.

However, Tyreek Hill believes Tua should be getting more credit. In an appearance on the “It Needed To Be Said” podcast, Hill was asked which of the quarterbacks he’s played with is the more accurate of the two. Hill surprisingly chose his Miami Dolphins teammate as the more accurate passer.

“As far as accuracy-wise, I’m going with Tua all day.”

Tyreek Hill says that @Tua is a more accurate QB than @PatrickMahomes pic.twitter.com/LUbhp2n8YK

It’s a bold claim to make about the young Dolphins quarterback. Yes, he was 4th in the NFL last season in completion percentage at 67.8%, but him being more accurate than Mahomes is debatable.

Mahomes had a slightly worse completion percentage last season than Tua at 67.3%, but there’s a strong case to be made that he put up that number while making much more difficult throws.

In 2021, Patrick Mahomes averaged 7.6 air yards per attempt. Tua only averaged 6.5. The extra 1.3 yards Mahomes was throwing the ball downfield on average more than makes up for the slight difference in completion percentage.

With players like Juju Smith-Schuster and Skyy Moore being used to replace Hill next season for the Chiefs, we could get to see what Mahomes’ accuracy would look like when he’s trying to make more short and intermediate throws than deep balls.

I guess we’ll just have to wait and see how Hill feels about his new quarterback’s accuracy once he’s played a live game with him.