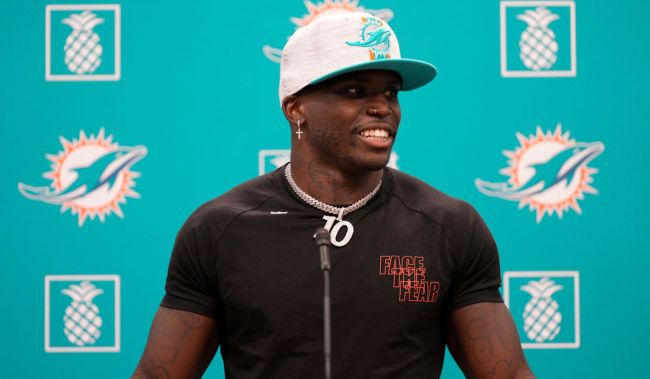 During his introductory press conference, new Dolphins wide receiver Tyreek Hill — who arrives in South Beach after spending the first six years of his career in Kansas City — addressed why he decided to join Miami and his answer was quite the relatable one: money. Lots of money.

“It’s tough. It’s tough, man,” Hill said of his decision to leave KC. “But [when] somebody comes to you with a lot of money? It changes. Your feelings start to change a little bit,” he told reporters.

Tyreek Hill joined the Miami Dolphins because of the contract offer

That money that Hill is referencing is the new contract he signed with Miami, which guarantees him around $72.2 million over the next three seasons.

During his NFL career thus far, Hill has caught 479 passes for 6,630 yards and 56 touchdowns. In the postseason alone, Hill has 84 catches for 1,081 yards and five touchdowns.

The Chiefs, who have played in four straight AFC Championship games and have won one Super Bowl during that time, have already begun the process of rebuilding their wide receiver corps. During free agency, the AFC West club has signed former Steelers wideout JuJu Smith-Schuster to a one-year, $10.75 million deal and former Packers pass-catcher Marquez Valdes-Scantling to a three-year, $30 million deal.

RELATED: Skip Bayless Thinks The Tyreek Hill Trade Is Bad For Both QBs, Says Patrick Mahomes Will Be ‘Exposed’