Skip Bayless Thinks The Tyreek Hill Trade Is Bad For Both QBs, Says Patrick Mahomes Will Be ‘Exposed’ 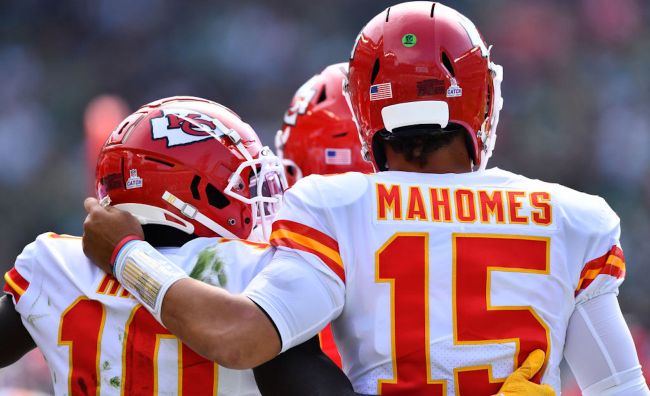 Given the endless cycle of sports media hot takery that we currently exist in, the Tyreek Hill trade provided all the sports talk show of the world with a juicy topic to discuss on Thursday morning. Perhaps unsurprisingly, it was Skip Bayless with the hottest take of them all as he claimed on Fox Sport 1’s Undisputed that the Hill trade is, in fact, bad for both quarterbacks — Chiefs QB Patrick Mahomes and Dolphins signal-caller Tua Tagovailoa — as he believes it will expose them both.

“I believe both these quarterbacks are about to be exposed to different degrees,” Bayless said on the Thursday episode of Undisputed. “Mahomes, I’ll say, a little bit but significant bit. And Tua a whole lot. It’s going to be career-threatening for Tua because all of a sudden he’s on the hottest seat in the National Football League. They have done everything they could. They have opened the checkbooks. They have broken the bank.”

While the Patrick Mahomes portion of Skip’s take is absurd — the man already has a Super Bowl title and MVP under his belt before the age of 26-years-old — he does have a point when it comes to Tua, as there are now absolutely no excuses for the third-year Alabama product not to perform.

RELATED: Tyreek Hill Breaks His Silence On Social Media After Being Traded To The Dolphins