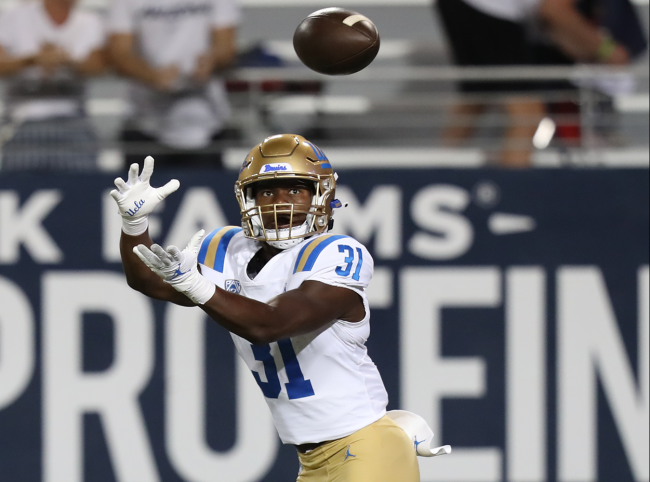 The Name, Image and Likeness era is giving college athletes the opportunity to promote and market themselves more than ever. UCLA running back Deshun Murrell is no exception.

Murrell, a former three-star recruit in the Class of 2021, chose to play for the Bruins over offers from Army, App State, Arkansas State, Kansas State, Harvard, Georgia Tech, Duke, and others. Upon arrival on campus, he took a redshirt year last season.

That didn’t stop the Alabama-native from cashing-in on his platform.

Murrell has 17.9 thousand followers on Instagram and 108.9 thousand on TikTok. As a result, he has received quite a bit of free merchandise and gear from various companies.

Being from the Yellowhammer State, Murrell is rather country compared to those around him. He wears boots and rocks denim and isn’t ashamed to do so in Los Angeles.

Murrell recently gave a tour of his (very organized and stylish) dormitory on TikTok and the amount of stuff he has received for free is insane. Pretty much everything that he shares in the video either came from the school or part of a partnership.

Take a look and listen:

♬ Love You So – The King Khan & BBQ Show

First and foremost, Murrell did a fantastic job decorating his dorm. It’s perfectly on-brand and it has everything that a freshman in college could possibly need. And his hat collection is awesome.

In terms of the stuff that that Murrell listed he got for free, it’s basically his entire closet and wardrobe:

Not bad. Murrell is the perfect example of what NIL should be. Even though he is further down on the depth chart, he is getting his!