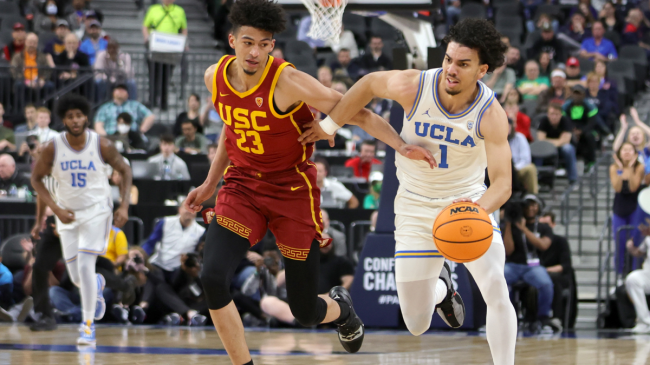 The USC Trojans and UCLA Bruins shocked the college sports world over the offseason after announcing their intentions to leave the PAC 12 and join the Big Ten.

Both schools are long time members of the “Conference of Champions,” and maybe the two most recognizable brands on the West Coast. The proposed move would take the Los Angeles market to the Big Ten, giving the league a pair of notable money makers to join the likes of Ohio State and Michigan.

It also provides a massive revenue boost for each of the schools’ athletic departments. The Big Ten’s television ties now top the college sports world, recently inking a $1 billion deal with three of the four major cable networks. The ability to attain that LA market was major leverage in the negotiation process.

Both USC and UCLA are hoping the money outweighs a laundry list of logistical issues, including travel expenses and the student-athlete experience.

The Bruins recently provided a document to the UC Board of Regents with a number of proposals to mitigate these issues. One suggestion, in particular, is standing out to the college sports world.

In an attempt to save money on flights to the Midwest, UCLA is suggesting that teams travel with rival USC to Big Ten events. This would impact a number of programs, not just football or basketball. Essentially, the teams could schedule Big Ten action against similar opponents (i.e. Indiana/Purdue or Michigan/MSU) or travel together to neutral site tournaments.

Here’s more from the UCLA proposal.

Travel improvements – $4,620,000 to 5,790,000
UCLA intends to mitigate the travel impact on student-athletes by increasing access to charter flights and minimizing the number of days spent away from campus. After conducting a detailed cost estimate of charter flights to Big Ten schools, calculating the number of additional charter flights needed for each team and days spent away from campus, UCLA estimates that it will spend between $4.62 and $5.79 million per year on increased travel expenses. These costs may be significantly reduced through efficiencies such as neutral site tournaments, shared flights between UCLA teams and USC teams, and other accommodations that can further reduce travel and travel costs to the Midwest and East Coast.

Many were quick to note the travel arrangements proposed by the Bruins, and they quickly commented online. Not everyone believes it’s a great idea.

One person wrote, “One of the cost control measures being considered for UCLA’s move to the Big Ten is shared flights for UCLA and USC athletes, get me a seat on one of those,” while another sarcastically asked, “What could go wrong?”

This fan questioned the move altogether after seeing the proposal, commenting, “Shared flights for USC/UCLA student-athletes to B1G locales??? Lol if you’re going to skirt margins like that you shouldn’t be doing this at all then.”

Should this come to fruition, it will certainly offer an interesting dynamic for travel between the rival schools. At this point, it appears the Bruins are willing to do anything to leave the PAC 12 and gain entry to the Big Ten.