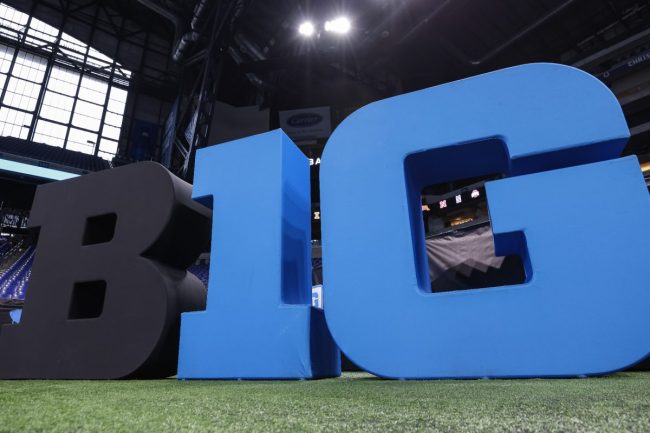 The Big Ten is in the midst of a few blockbuster TV agreements that could result in the league landing more than $1 billion annually in media rights. The conference is looking to sign deals with three of the four major cable networks in order to air both football and basketball matchups.

Andrew Marchand of the NY Post reports that the Big Ten is hoping to have a trifecta of major college football games each Saturday, with Fox airing a noon game, CBS grabbing the 3:30 PM slot, and NBC closing with a night cap. The deals would also include some agreed upon schedule for basketball, but the football agreement is interesting.

ESPN and ABC agreed to an exclusive deal with the SEC which will start in 2024. That agreement is worth $300 million for football alone. It removes the classic 3:30 PM ‘SEC on CBS’ airing, which will now be replaced by the Big Ten.

The SEC’s previous contract with the network paid $55 million per year. CBS’s new agreement with the Big Ten? $350 million.

Again, that also includes basketball rights, but it locks the network in for that 3:30 PM time slot each football Saturday. The fact that the yearly value of the contract is worth seven-fold of the previous SEC deal is nuts.

CBS is expected to pay the Big Ten roughly $350 million per year for its 3:30 games, per @AndrewMarchand. pic.twitter.com/7xwpqN8ap2

Marchand goes on to say he believes the NBC deal could be worth even more, and when all is said and done, the conference will be looking at over $1 billion in media rights money.

The SEC’s deal with ESPN and ABC for all sports is around $700 million.

The fact that the Big Ten is taking over as college sports’ most powerful league has many on social media talking.

ESPN and the Big Ten will be without an agreement for the first time in 40 years. It doesn’t seem to be bothering the league, though, as they should be rolling in the dough when everything settles.

The Big Ten has long been one of the two top leagues in college sports. Now that it’s added the Los Angeles area, they can fill all major TV time slots, dig into one of the nation’s largest markets, and provide viewers with two more national brands.

Take a look at what folks on social media are saying about the Big Ten deal.

This isn’t surprising. The SEC might have better overall play, but the money goes to the numbers and rn, the Big Ten has the largest media markets of any conference.

This media deal will easily exceed $1B. Fox, Big 10 Network, NBC, CBS and streaming on Peacock. Wall to wall Big 10 coverage, love it!

Those curious why: #B1G has a huge market which includes LA, Chicago, and New York.

Of course, there are also naysayers.

Nothing better than watching a bunch of slow white guys battle to a 17-10 finish. Kill me. Big 10 is so terrible.

Does CBS realize that the Big 10 sucks?

The Big Ten won’t care too much about those haters. They won’t be able to hear over all the cash rolling in.