College Football Insider Reveals How Much Money USC, UCLA Can Make By Joining The Big Ten 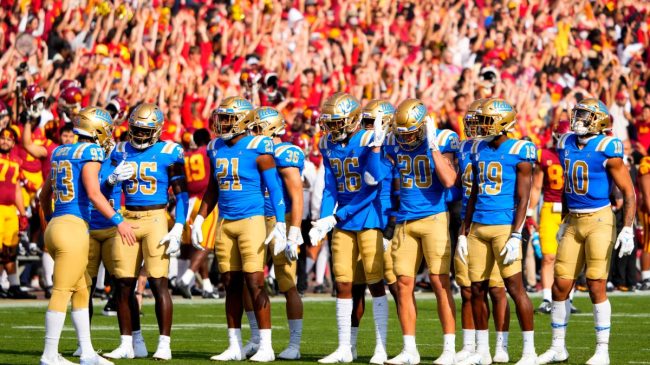 USC and UCLA stand to benefit a lot from joining the Big Ten.

Earlier today, it was reported that the Trojans and Bruins would be leaving the PAC 12, with hopes to join their new affiliate in 2024. That easily upgrades the Big Ten, who already boasts blue blood programs like Ohio State, Michigan, and Nebraska.

It also severely cripples the PAC 12, which could dissolve when things are all said and done.

While the competition is certainly a reason for leaving, we all know the true motive behind the move. Money.

And USC and UCLA could be sitting pretty in just a few short years.

Jon Wilner, who originally broke the story of the Trojans and Bruins wanting to move on from the PAC 12, says the two programs are set to enjoy an immediate financial boost upon joining the Big Ten. It could be upwards of nine figures in media rights, alone.

Wilner says that each program can make upwards of $100,000,000 a year in media rights by joining the Big Ten.

The Big Ten has a media partnership with Fox and is the only conference in college football that can mirror the SEC’s media revenues. Wilner speculates that this is Fox’s answer to ESPN and the SEC teaming up to nab Texas and Oklahoma from the Big XII.

This serves as Fox's answer to ESPN with Texas/OU

And there’s no telling how long this has been in the works. He also notes that the media rights deal for the Big Ten was set to be handled in May but then was put off for no apparent reason.

Remember when the Big Ten's media rights negotiations were supposed to conclude in May, and then got delayed with no real explanation … https://t.co/IZ41y8vitK

When things are all said and done, we could very well wind up with two mega-conferences in the SEC and Big Ten. You can bet teams from the ACC like Clemson, Florida State, and Miami will want a piece of the pie as their current conference just can’t offer these kinds of payouts.

The same can be said for what’s left of the Big XII and PAC 12.

Realignment is just beginning, and the driving factor is money.