College Football Fans Debate What Will Happen To Oregon, Pac 12 When USC And UCLA Leave 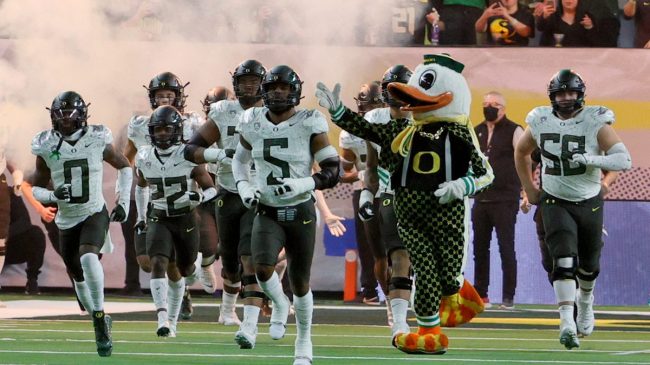 The college football world was turned head over heels with a breaking report on Thursday afternoon.

PAC 12 insider Jon Wilner tweeted out that two of the league’s biggest brands are considering leaving the conference. USC and UCLA are the two schools, and they represent arguably the most high-profile football and basketball programs on the West Coast.

Without them it would be tough for the conference to survive.

The league would fall to 10 teams, losing their presence in Los Angeles. The PAC 12 had already struggled to get teams into the College Football Playoff due to lack of success on the gridiron, and without USC in particular, the strength of the conference would fall even further.

That very issue has fans wondering what will happen should the Trojans and Bruins actually move on to the Big Ten. Would the PAC 12 try to stay afloat by adding teams? Programs like Boise State could be an option our west.

Would they think about joining forces with the Big XII, who has also seen two of its top programs poached from the league?

Also, what happens to Oregon, who would be left as the lone consistent College Football Playoff contender?

Fans are debating that very thing on social media.

Would Oregon consider leaving the PAC 12, too? Or would they stay put?

If USC and UCLA leave, it certainly gives them an easier path to the conference championship, but that strength of schedule might be too weak to overcome in terms of the CFP.

Maybe they’d follow USC and UCLA to the Big Ten, if possible.

Here’s what fans are saying.

Oregon has left the Pac-12 for the LIV Tour

Oregon & Utah: "You're taking us with you, right?" pic.twitter.com/cUUg7lGOq4

Oregon in the Pac 12 pic.twitter.com/qtuXDuhGKg

Others are debating a possible move by the PAC 12 to partner with another conference.

It’s going to be SEC/ACC and B1G/PAC 12 combining powers. Rather the Big Ten be aggressive than get left in the dust. You can hate it’s all happening (I wish it was still P5) while also understanding you have to Adapt or die

If USC and UCLA join the Big Ten, the SEC and Big Ten have clearly established themselves as a big two. The ACC is a much further behind in third place and the Big 12 and PAC 12 are both left struggling to survive as major conferences. Maybe Big 12 and PAC 12 try to merge?

So USC and UCLA are heading to the Big 10. A massive punch in the gut to the PAC 12. It’s time for the Big 12 and PAC 12 to consolidate before they become obsolete.

It will certainly be interesting to follow should USC and UCLA eventually leave. This move would provide a huge shake up to college football.