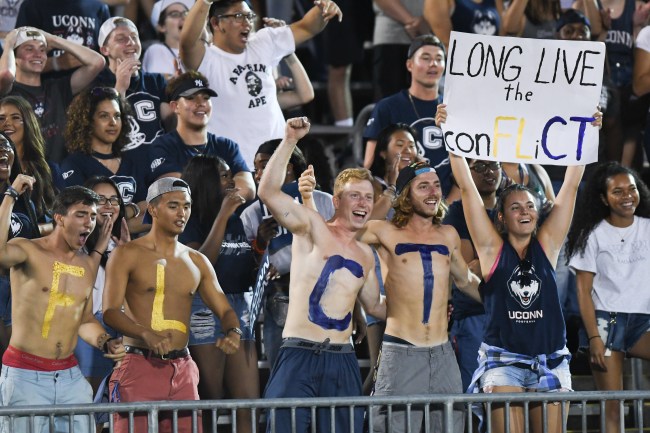 UConn football woke up and chose violence. Although the Huskies are +30.5-point underdogs against UCF, the team decided to take shots at their former American Conference foes to start the day.

The two schools are set to meet on the gridiron for the first time since 2016 on Saturday afternoon. History between them does not date back long…

… but it is rather storied.

In 2014, then-UConn head coach Bob Diaco contrived “the Civil ConFLiCT” rivalry between the two programs— capital FL for Florida and capital CT for Connecticut. At the time, both schools were in the AAC and Diaco created a trophy to be contested in what was an annual matchup at the time.

First day back on campus for #UConnFootball! And just 130 days until the next Civil Conflict with @UCF_Football ! pic.twitter.com/RgOkXiob0T

Then-UCF head coach George O’Leary was not a fan of the forced rivalry due to the distance between Orlando, Fla. and Storrs, Conn. His school was not involved with the creation Civil Conflict at all.

Just checked w/ @UCF_Football: "We have no involvement with the trophy or creating a rivalry game with UConn." They were surprised by tweet.

UConn won the game in 2015, so the Huskies could keep its made-up trophy. However, when UCF won in 2016, the team left the trophy on the field and hen-head coach Scott Frost completely disregarded the fake rivalry.

Frost gave a diplomatic answer when I asked about the #ConFLiCT Trophy snub. But yeah, UCF clearly wanted no part of it. pic.twitter.com/TVvbDbrjkr

The whereabouts of the trophy were unknown. Nobody cared.

Despite Diaco’s persistent insistence, the rivalry never took off— especially when he was fired after the 2016 season. Since then, the Civil Conflict has been dormant.

As the Knights and Huskies gear up to face one another for the first time in five years, the trophy reemerged on UCF’s twitter account on Friday night with a new look. In response, UConn could not resist a good troll and took a shot at their (fake) rivals claiming a national championship after going undefeated in 2017.

Was this made at the same place that did your National Championship trophy? https://t.co/QPGH5iML8q

UConn won the not-so-Civil ConFLiCT on Twitter, however it is unlikely that it will win the game on the field. UCF will almost certainly retain its now remade, made-up trophy for a fake rivalry.