HEAVYWEIGHTS: Beyond Masvidal And Diaz, Keep Your Eyes On Derrick Lewis And Blagoy Ivanov At UFC 244 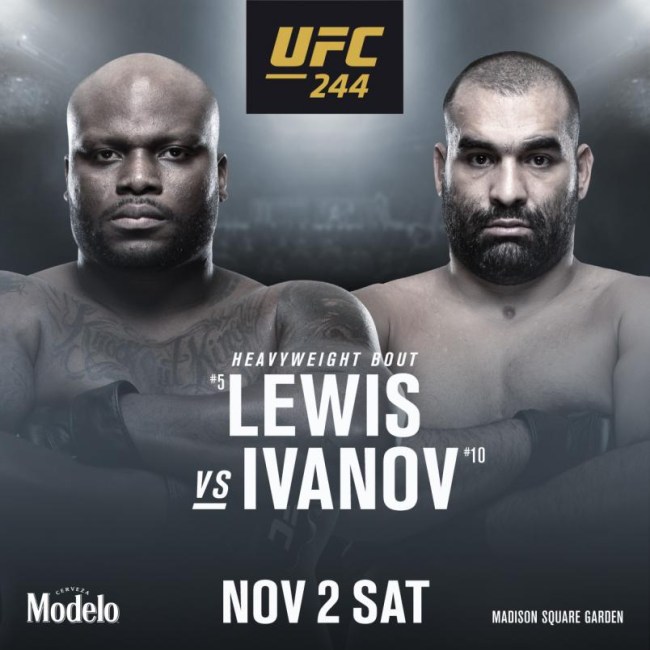 When you start talking about the baddest mother truckers in the UFC, no doubt names like Nate Diaz and Jorge Masvidal fly right off the tongue just a quickly as those those fighters can rip off a five punch combination. Mixed martial arts is a sport chock full of BMFs, and on November 2, a pair of the baddest heavyweights in the world will clash on the UFC 244 Pay Per View main card on ESPN+, with Derrick “The Black Beast” Lewis taking on Blagoy Ivanov, who is so bad that, well, he requires no nickname whatsoever.

While Masvidal and Diaz will fight for the official UFC BMF title in the UFC 244 main event, Lewis and Ivanov are lifelong BMFs, guys who have overcome insurmountable adversity to find success inside the Octagon, throwing hands and kicks, knocking fools out.

That’s the very definition of a BMF.

Derrick Lewis: A Little Bit Bad, But a Whole Lot of Good

Lewis is a bit of a known commodity in the UFC. He went viral in 2018 with his “my balls was hot” comment following a come-from-behind knockout victory over Alexander Volkov on the UFC 229: Khabib Nurmagomedov vs. Conor McGregor card, the highest selling PPV in MMA history. The knockout, along with the verbal zinger and picture of him with his shorts off while standing in the middle of the Octagon talking to Joe Rogan, ultimately propelled Lewis to a UFC title shot against Daniel Cormier.

Unsuccessful in his lone UFC title fight, Lewis, the UFC’s fifth-ranked heavyweight, has been a model of consistency during his five years in the UFC, going 12-5 with 10 knockouts. He’s also collected six fight night bonuses on account of his brutal KO power. All of these stats solidify Derrick Lewis as a legitimate BMF, but don’t forget, the former inmate and reformed citizen also has a nice streak in him, which was evidenced back in 2017, when he reportedly saved nearly 100 people during the floods that ravaged Houston after Hurricane Harvey. If only he could take back that snoozer of a fight against Francis Ngannou, a bout that many regard as the all-time worst fight in the history of the UFC.

Regardless of what anyone says about the Ngannou fight, Derrick Lewis remains a tried-and-true BMF, which perfectly qualifies him to compete on the UFC 244 Pay Per View main card on ESPN+.

How Do You Say BMF in Bulgarian?

Even regular viewers of MMA may not be too familiar with Blagoy Ivanov, the UFC’s eighth-ranked heavyweight, but that doesn’t mean Ivanov is any less of a BMF than anyone else on the UFC 244 card.

Born in Sofia, Bulgaria, Ivanov made his name on the Sambo circuit, where he beat the legendary Fedor Emelianenko en route to taking the gold medal at the 2008 World Sambo Championships. Ivanov then transitioned to MMA full-time.

A heavyweight standing just 5’11”, Ivanov is an incredible grappler and submission artist, but he also has some hands. With Ivanov, however, the real key is his toughness, and that can never be questioned. He is literally the UFC BMF in terms of toughness.

Back in early 2012, Ivanov was jumped by a gang at a bar in Bulgaria and stabbed repeatedly. Even with a punctured lung and multiple wounds, however, he managed to fight off his attackers and hail a taxi to the hospital, where he fought for his life while in a medically induced coma. Certainly cheating death to this extent is the true sign of a BMF.

Ivanov remained in the hospital for several months, recovering from the incident, and 19 months later, he was back in the cage, choking guys — much, much bigger guys — out.

Now on the PPV main card of such a high profile event like UFC 244, it’s about time for Ivanov to get his due, although Lewis presents a unique challenge because of the one-punch knockout factor.

Yet another intriguing fight on the super stacked UFC 244 card on ESPN+, Ivanov versus Lewis is undoubtedly a fight of BMFs, for BMFs, so make sure to tune in and check it out.